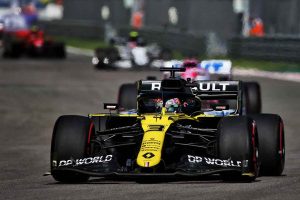 The FIA stewards have mopped up a few Russian Grand Prix incidents after the race with penalty points for Daniel Ricciardo and Alex Albon.

Turn 2 proved to be a real pain in the backside for the drivers on race day at Sochi. Carlos Sainz made himself look rather foolish crashing into the barrier when trying to navigate his way the bollards on lap 1 and he was not the only one to have an incident there.

Both Ricciardo and Albon received five-second time penalties each for effectively cutting the chicane at Turn 2 rather than head to the left of circuit and snake through the bollards.

The stewards confirmed after the race that both drivers have one penalty point apiece on their respective licenses. That moves Ricciardo onto three points and Albon is up to five.

Now up to 10 and two more points shy of a one-race ban, Lewis Hamilton received a penalty point each for his two separate practice start infractions before the race had even started.

One driver who is in the clear, though, is Romain Grosjean, who navigated his way through the polystyrene Turn 2 bollards simply by smashing into them – much to the amusement of many.

“Car 8 left the track at turn 2 failed to follow the RD’s instruction as defined in the event notes 22.1 but in this case the situation resulted from a racing incident due to the proximity of car 5 and the driver did all he could to follow the race directors instruction the Stewards decide on no further action.

“Competitors are reminded that they have the right to appeal certain decisions of the Stewards, in accordance with Article 15 of the FIA International Sporting Code and Article 10.1.1 of the FIA Judicial and Disciplinary Rules, within the applicable time limits.”

Grosjean, still searching for his first point of the season, finished P17, while Ricciardo and Albon were both in the points, P5 and P10 respectively.