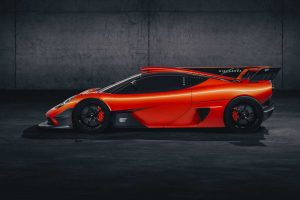 If you have spent your entire adolescence and all of your adult life longing for a McLaren F1, well, forget all that. Start over, right now, and begin devoting your life, as well as all that time at work when you’re supposed to be looking at spreadsheets and reading lectures from HR, and just slobber 24 hours a day over the new Gordon Murray T.50s Niki Lauda. It will be time well-spent.

The T.50s Niki Lauda is the track-only super version of the already super T.50, except that designer Gordon Murray and co. have removed even more weight from it, added even more downforce and given it even more power. Since it’s made for track driving only, it can be lower, firmer and even lighter than the road car. This thing should be banned from all computer screens at any company that wants to get anything else done during the day. But hang on, we’ll ban it later. For now consider these salient points:

And unless you are one of 25 of the luckiest, wealthiest potentates on Earth, you will never own one! (Well, some of you will but for the rest of us all we’ll ever have are these photos.)

So okay, let’s discuss some specifics.

First, the name. Niki Lauda drove and won in several Gordon Murray designed cars in Formula 1, perhaps most famously in the BT46-B “sucker car,” with a big fan on the back that literally hoovered the car down onto the pavement. It was so good it was banned after Lauda won the Swedish GP with it that year. Lauda and Murray remained friends after racing. When Lauda passed away two years ago, Murray wanted to honor his friend by naming the car after him. How did he manage getting the rights to the name?

“I called the family and asked,” Murray said.

Now for the car: It’s based around a specially developed lightweight carbon fiber monocoque with carbon fiber wrapped around a honeycomb aluminum core. The body panels, all custom-fitted to the T.50s Niki Lauda, area also carbon fiber. The windows and windscreen are lighter than the street version, too.

It rides on the same forged aluminum double wishbones all around but the springs, dampers and anti-roll bar are optimized for track performance. The ride height has been lowered 3.4 inches in front and four and a half inches in back. So you’re not going to clear any speed bumps.

Steering is the same as the T.50 but with a quicker ratio. Brakes are carried over from the T.50, and offer 3.5 gs of stopping force (buckle up.) Wheels are forged magnesium and weigh just 13 pounds each. The aerodynamics create 3,307 pounds of downforce at 200 mph. That sucker fan is just to clean up the airflow on the underside of the body, it doesn’t actually suck the car to the ground, Murray says. The big fin is for stability during incidents of slip angle, i.e. sliding sideways.

The 3.9-liter naturally aspirated V12 makes 701 hp. The car’s power-to-weight ratio is better than an LMP1 car, Murray says. It’s mated to a “bespoke” Xtrac Instantaneous Gearshift six-speed transmission operated via paddle shifts on the wheel. Because the gear ratios are focused for track use, top speed is “only” 200-210 mph. 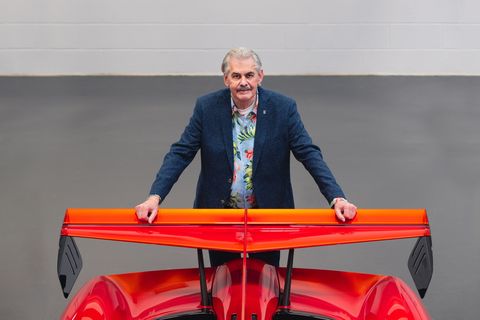 But enough specs-box yammering. We got about a half hour with Prof. Murray himself. Check out what the legendary designer has to say about his latest masterpiece here.