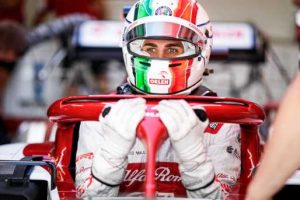 Antonio Giovinazzi repaid Alfa Romeo for his new deal with a points finish at Imola, revealing he watched videos of starts at the track the night before.

Starting from the very back of the grid, the Italian opted for the soft tyres while those ahead of him went with the mediums.

Giovinazzi put his softer rubber to good use, shooting up six places on the opening lap alone.

From there it was a steady afternoon as he worked his way further forward, finishing in 10th to score his fourth point of the season.

“[Saturday] night I did again quite a lot of work watching all the starts, from Formula Renault, Formula 4, all the stuff I had here in the laptop.

“And I put it all together on lap one, a little bit of luck and everything, and this is it.

“We pushed quite a lot in the beginning of the race with the soft, and then we changed to medium, pushing until the end.”

He's gained places on the first lap of EVERY race in 2020 [email protected]_Giovinazzi will have loads more chances to show what he's got after being re-signed for 2021! ✍️#F1 @alfaromeoracing pic.twitter.com/3RqWgBEIg9

Alfa Romeo played the strategy game with the Italian late in the race as the team opted not to pit him behind the Safety Car.

Chosing track position over fresh tyres, the team left both Giovinazzi and Kimi Raikkonen out.

But while Raikkonen had only pitted a few laps prior to the Safety Car, Giovinazzi was on older tyres.

He, however, managed to hold onto a top-ten showing.

“It was a little bit tricky in the end, with the mediums they were quite old, and the temperature dropped. It was difficult to keep the people behind who were on softs,” he added.

“I did the maximum to keep all the cars behind, and I was in the points, so I was really pushing very hard. It’s a good thing to celebrate the renewal of the contract.

“I think it was all good. I think also with Kimi scoring points with two cars is something great for the team and Alfa Romeo.”

Despite the double points haul, Alfa Romeo remain eighth in the Constructors’ Championship on eight points, a massive 81 behind seventh placed AlphaTauri.