Gerhard Berger still thinks Sebastian Vettel is past his peak 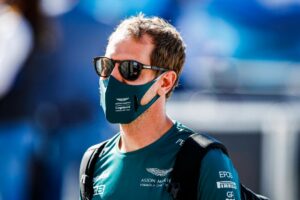 Ex-Formula 1 driver Gerhard Berger feels Sebastian Vettel is “still past his peak” despite improved recent showings in Monaco and Baku.

The troubles that Vettel experienced at Ferrari appeared to have followed the four-time World Champion to his new team Aston Martin as he struggled to initially adapt to the AMR21.

However, the Vettel of old has made a re-appearance with a rock-solid P5 finish at the Monaco Grand Prix followed up with a memorable podium finish at the Azerbaijan Grand Prix.

But, Berger still believes Vettel is past his best and drew upon his own Formula 1 experience to notice a similarity with what Vettel is facing at this stage of his career.

Remember when we came 2nd in Baku? That was a wild ride. 💚 pic.twitter.com/b575D3nqKQ

“By 1995, I was already in the autumn stage of my career and couldn’t get used to the way the Benetton was built precisely to Michael [Schumacher’s] needs,” Berger said in an interview with Sport1.

“Still, again, 10 years earlier it wouldn’t have been a problem for me. I see it similarly with Sebastian [today].”

Expanding on that comment, he added: “He’s also increasingly demanding that a car has to suit his driving style.

“That shows that he’s already over his zenith in terms of speed and willingness to take risks. But with his wealth of experience, he can still have three or four good years.

“In any case, I know how it was for me. I had my driving peak between 27 and 30. After that, it slowly went downhill.

“Sebastian has always had problems being fully motivated when he had to drive around in midfield. When he can drive at the front, he tastes blood, makes no more mistakes and delivers full performance.

“But I have to say one thing: he’s a four-time World Champion, has 120+ podium finishes – he’s one of the best drivers of all time.

“You forget that very quickly but, in terms of performance, I still think he’s past his peak. But who knows, maybe something will happen this season.”

Berger concluded his thoughts on Vettel by saying that he does not envisage him ending up in a bad situation at Aston Martin given how highly recommend he is by key figures.

“After all, with the support of team owner Lawrence Stroll and the backing of Mercedes team boss Toto Wolff, he won’t find bad conditions.

“In any case, the team is good enough to finish on the podium, as it did in Baku.”