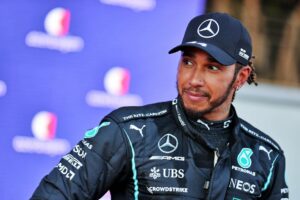 It appears Hamilton is going to have a real fight on his hands if he is to stand alone at the top of the Formula 1 mountain with an unprecedented eight World Championship titles come the end of the season.

Neither he nor leader Max Verstappen have been picture perfect on the track after six rounds of the season so far, with Hamilton’s most notable mistakes coming in Imola and then last time out in Baku where he accidentally flicked the brake magic switch after the race restarted for a two-lap dash.

And Berger suspects there will be more of those errors to come if Verstappen and Red Bull are able to keep the pressure on.

There is nothing we can do about the past but learn. We rise each day to a new opportunity and chance to be better than the day before. I for one am driven, more focused than ever and looking forward! We win and we lose together, we can do anything we put our mind to! pic.twitter.com/kr3N0NHf9Y

“You can see quite clearly now that the two are on a par,” Berger is quoted as having told ServusTV by Speedweek, providing his assessment on the overall title picture.

“Max is even slightly ahead. But a lot can still happen this season, it’s still long.

“It’s great how Formula 1 is presenting itself this year. Finally, after so many years, we see two or three-way battles again.

“Then in qualifying Ferrari can come in from behind and put itself on pole.

“With Max and Lewis we have two exceptional drivers and they now have a technical package that doesn’t give each other anything.

“Max has no blunt weapons, he has a super fast car. He also has an engine that is not that far away from the Mercedes engine in the meantime.

“Max is playing all keys on the piano and Lewis will make more mistakes under pressure than in the past.”

Berger also reserved praise for Red Bull and their progress over the off-season and how it has helped his native Austria as a whole become a competitive force in motorsport.

“They have been looking for more engine power for two or three years and Honda did a great job over the winter and did their homework. There is a great chance to become World Champion again.

“That we have become such a strong motorsport nation with Red Bull, with our own Formula 1 team fighting for the World Championship, with a second team, is fantastic. Add to that a race track where everything takes place – a Formula 1 double, also MotoGP and DTM – that’s a blessing for us motorsport fans.

“I’m always asked about how the small country of Austria is involved everywhere and plays a role.”