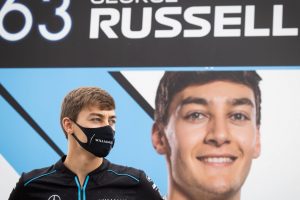 George Russell endured a race to forget at the 70th Anniversary Grand Prix – and like many of his rivals, revealed tyre wear had been the problem.

The Williams driver had been encouraged by his race pace in the British Grand Prix at Silverstone a week earlier but this time there was no such promise as he finished in P18, with only his team-mate Nicholas Latifi behind him.

The planned strategy went out of the window because of the excessive tyre wear caused by hot temperatures and the softer compounds brought by Pirelli – while a poor start also did not help the Englishman.

Not gonna lie, today was tough. Glad we get to go again next week. See you next year Silverstone ??❤️

“Compared to last Sunday it was much worse,” said Russell, who had started in P15 after reaching Q2 for the fourth consecutive race.

“I made a really poor getaway and lost a couple of positions. From then on the tyres were just atrocious, I think for everyone.

“We did a three-stop race – I think we were hoping to do a one-stop at the beginning, which shows how difficult it was. At the end it was just a case of bringing the car home because I thought the left rear was going to blow, so it was tricky.

“After my second stop I did four or five laps and then suddenly my left rear tyre blistered drastically. Over the course of two or three laps the blistering got worse and worse, the vibrations got really bad and I made a call that we needed to ‘box’ and change the tyre because it was going to go.

“So not great and a lot to review.”

Russell’s Williams team-mate Latifi had more positives to draw on, even though he finished last of the 19 finishers with Kevin Magnussen (Haas) the only driver to retire.

“It was definitely a race where we needed to be constantly adapting with the strategy,” said the Canadian.

“The tyres were unpredictable but the car felt amazing – better than in any of the four previous races. It was the most confidence I’ve had driving, feeling really good to push.

“I think earlier in the race, if I had been able to get by some cars or with a bit of different track positioning, I really think we could have achieved a much better result.

“That’s something to learn from for sure, but I think there’s still quite a lot of positives to take despite the result.”