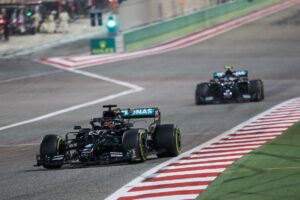 George Russell thinks his strong Sakhir Grand Prix showing offered confirmation to outsiders that he was ready for Mercedes more than it did Toto Wolff.

The Briton will be a fully-fledged Mercedes driver for 2022 onwards after serving a three-year Formula 1 apprenticeship with Williams, mostly towards the back of the grid.

But when he was afforded a ‘guest’ opportunity due to Lewis Hamilton’s illness at the 2020 Sakhir Grand Prix in Bahrain, Russell grabbed it with both hands by shining in the Mercedes.

He put the car on the front row of the grid, only 0.026sec slower than his temporary team-mate Valtteri Bottas, and outperformed the Finn in the race, leading for much of it and only denied victory by a pit-stop blunder from the team and a subsequent slow puncture.

Although he had to wait another nine months before his permanent promotion to Mercedes was announced, Russell thinks it was only people externally who had been convinced Sakhir showed he had what it takes – because the team principal was already a convert.

In all honesty, we're a massive fan of this. 🤩 pic.twitter.com/Qy5pZA58hM

“I guess Bahrain (Sakhir, 2020) was the key moment that if there were any doubters, the doubts were gone,” Russell told the Motor Sport Magazine Podcast.

“The key people who would have made the difference in my career, Toto…he ultimately is the one who has the final say.

“He believed in me and he had faith in me, even when I was finishing last every single weekend. So for me, that race obviously potentially proved a point to so many others but at the end of the day, it’s Toto who makes the decision.

“Because he followed my career so closely, I guess he believed he knew what I was capable of. So that race probably didn’t really change anything in his mind whatsoever, but to the outside world so many others may have thought ‘okay, it’s clear why he wants to go down that route’.

“But I guess for everyone that was a stand-out race and a pretty crazy one when I look back at it.”

Although Russell missed out on a spectacular result that night in Bahrain, he did start to taste some success in his final year at Williams with P2 at Spa – and should enjoy plenty more podiums and at least some victories with Mercedes.

“It’s an amazing opportunity to again progress myself as a driver and see how I fare,” said the driver who will turn 24 years old in February.