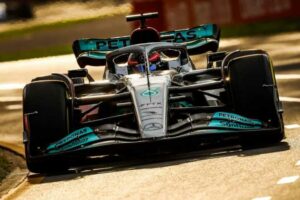 Due to the budget cap, George Russell says Mercedes can only upgrade the W13 when they are sure it will be effective.

The Silver Arrows have failed to match the leading pace of Ferrari and Red Bull during the opening two rounds of the season and while they were faster than the midfield in race trim at the Bahrain and Saudi Arabian Grands Prix, the signs have not been promising at all so far in Australia.

Neither Mercedes driver cracked the top 10 in the second practice session on Friday, while Russell has revealed the team have not brought an upgrade to the Australian Grand Prix.

And Russell explained the $140m cost cap plays a vital role in determining when an upgrade arrives, for the team cannot afford to keep throwing parts on the car to find out what works and what does not.

“We are a long way behind Ferrari and Red Bull,” said Russell, quoted by the Formula 1 website.

“I think we were probably further behind them in Jeddah [than in Bahrain] and we understand why. But obviously when I think we had things optimised, or more optimised in Bahrain, we were still half a second, six tenths behind.

“So we need to obviously close that gap, but there’s nothing substantial this weekend that will do that. It will take time and I think we just have to be disciplined and patient because we are so far behind and because of the cost cap, we can’t afford just to throw things at it and trial and error at race weekends.

“We need to trust the process and bring the upgrades when we have total faith and confidence they will do as we expect. So that will be a number of races before we start seeing that.”

Lewis Hamilton confirmed Mercedes did not bring any upgrades for the W13 to Albert Park, but hopes that with four DRS zones active around the redesigned circuit he will be able to get involved in some racing action.

“The car is the same car generally as the last race, but with every little race we make a small improvement and I hope it just feels a bit better here. Plus we have the four DRS zones. I’m just hoping we can race harder here.”