George Russell has pole position award named in his honour 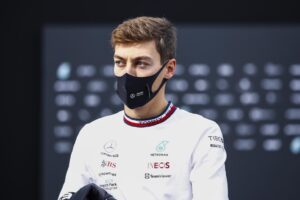 The driver with the most P1 starts in the newly-rebranded GB4 category this season will receive the George Russell Pole Position Cup.

Russell and the founder of the award, John Cavill, were in contact with each other regarding the awarding of the new trophy, with Russell being a previous winner of the equivalent award himself in British Formula 4 – and his name will now be adorned on the trophy after its renaming to GB4.

Cavill has personally donated a total prize pot of £4,000 per season to young drivers looking to make their way in the junior categories, with the now-Mercedes driver winning the award and £1,000 top prize back in 2014 on his way to winning the title that season.

Russell described it as an “honour” for his name to be on such an award for young drivers, having followed the same path himself in his younger days.

The suit. The helmet. The smile. 🥰❤️ pic.twitter.com/NKBbxrxGFh

Russell said upon the announcement: “John Cavill has been very supportive since my earliest days in racing, and he became a familiar face in my BRDC F4 Championship winning season in 2014.

“He has given his backing to so many young drivers in junior race series, and it is an honour to accept his invitation to lend my support to his initiative in the new GB4 Championship.

“Winning the BRDC F4 Championship in 2014 was pivotal for my career, I don’t think I’d be where I am today without it, and I’m sure that GB4 will provide the same opportunities I received back then.

“I look forward to congratulating the 2022 George Russell Pole Position Cup winner at the end of the year!”

Award founder Cavill said: “It remains a massive privilege to play a part in the GB3 and now GB4 Championships, and I would like to thank Jonathan Palmer [MotorSport Vision chief executive] for the opportunity to be involved in these two great championships.

“I’m really pleased that George accepted my invitation to get involved in the Pole Position Cup for GB4. Qualifying has always really excited me and I feel it showcases the fastest driver across each weekend.

“George was an excellent winner of the award in 2014, and I hope the winner of the George Russell Pole Position Cup will have a good chance of following in his footsteps.”

After a now-famous photo of him stood behind Lewis Hamilton as a child in 2008, Russell will now partner the sport’s seven-time World Champion at Mercedes this season, following his move from Williams, and he said recently he’s not going to change anything about his approach from previous years as he looks to take the fight to his new team-mate.