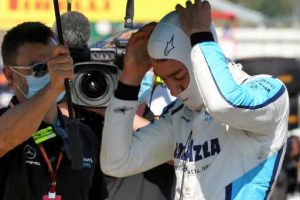 George Russell has joined Lando Norris in calling for Formula 1 to review the free tyre change during red flag stoppages.

Two weeks ago Norris lost a possible podium finish when the Italian Grand Prix was red flagged and Lance Stroll, who had yet to take a pit stop, was handed a free tyre change.

The Racing Point driver raced to third place ahead of Norris despite not making a single pit stop during the grand prix.

One week later it was Russell who fell foul of the rule as this time it was Charles Leclerc who benefitted from a free tyre change.

Leclerc finished eighth at the Tuscan Grand Prix while Russell once again missed out on a first point, down in 11th place.

“I do agree the biggest thing is the tyre change in the pit stop,” the Williams driver told Autosport.

“These guys are getting free tyre changes.

“We were on a good strategy, the tyres were great for us and then suddenly people can box and put on whatever tyres they want. They ultimately get a free pitstop.

“I was ahead of Charles. He didn’t box, he lucked into the red flag, and then he’s ahead of me and can just put a new set of tyres on.

“So I lost a position to Charles under the red flag.”

Vettel on Russell: "It will come for him. Poor soul! I think he really deserved a point. He fought his way up through the points and didn’t get the result he deserved."https://t.co/teq20x6wcI#TuscanGP 🇮🇹 #F1 pic.twitter.com/IK7nIDljob

Sunday’s result means Russell is now on a 30-race streak without a single Formula 1 point.

He added: “If you’re going to continue to do this more often, they need work on a couple of rules.

“You shouldn’t be allowed to have a free tyre change as part of the race.

“You’re in the race. You need to stay on the tyres you are on at that time.

“People plan their strategy around a normal race not around races that are getting two red flags in.”