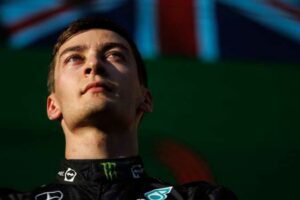 George Russell says his past experience with “very difficult cars” at Williams could be what has given the edge on Lewis Hamilton in the midst of Mercedes’ struggles.

Russell made the leap up the grid from Williams to Mercedes for this year’s championship, but it is by no means the season the Briton had been dreaming of.

Instead of fighting for race wins and the World title, Mercedes are struggling to eradicating their porpoising problems while picking up points.

But in the midst of all their troubles, Russell has one of the better points-scoring records of 2022 as he is the only driver to have finished all four grands prix inside the top five.

His team-mate Hamilton hasn’t even scored in every race, the seven-time World Champion a lowly P13 at the Emilia Romagna Grand Prix.

It begs the question why is Russell seemingly able to get more out of the car than his team-mate.

“Perhaps with my struggles at Williams driving very difficult cars, maybe that has helped in some small regard,” he said as per GPFans.

“Q1 and Q2 for us now is massively important whereas previously for Mercedes that was a breeze, it was almost a build-up session getting ready for Q3.”

Russell, though, has backed his team-mate to bounce back.

“Lewis is going to come back incredibly strong,” he said. “I have no doubt, and he is definitely going to be pushing me all the way.”

As for his own results this season, Russell has managed just one podium result so far, the driver P3 at the Australian Grand Prix.

He currently sits fourth in the Drivers’ Championship with 49 points, 21 ahead of Hamilton.

“I think in terms of results,” he added, “we’re definitely getting the most out of it and things have definitely fallen our way in these first four races.

“It gives me and I’m sure it gives the team confidence that when the car improves we will be there to get even more points on the board.

“But as I said before the weekend, we can’t sustain this level of these results if we don’t improve the pace of the car.”

Mercedes will trial different solutions at this weekend’s Miami Grand Prix with an eye to resolving their bouncing issues and unlocking pace from the W13.

“We have found several directions for improving the car, and we will be conducting experiments in Miami to correlate those simulations, and hopefully confirm the development path for the coming races,” said team boss Toto Wolff.