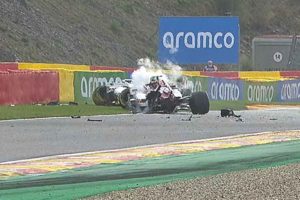 George Russell and Antonio Giovinazzi thankfully were unhurt after a huge double-crash at the Belgian Grand Prix.

Giovinazzi lost control of his Alfa Romeo as he accelerated out of the Fagnes chicane before crashing heavily into the wall.

But the impact caused the left rear wheel to detach from the Alfa, at which point it travelled back across the track and hit Russell’s Williams FW43, wrecking the front-right area of his car and sending Russell into the wall hard at the other side of the track.

That was scary. Thank goodness both Antonio Giovinazzi and George Russell are ok.#BelgianGP ?? #F1pic.twitter.com/GGe9fQBWCd

Understandably there was great concern for both drivers after the incident, but thankfully both climbed out of their cars unhurt.

The incident it was expected would bring out the red flags due to the amount of debris on track, but instead it was covered by the Safety Car and the drivers carefully picked their way through it.

It also triggered a frenzy in the pits as drivers flocked to fit the hard tyres.

Charles Leclerc was one of the biggest losers in that as he dropped from P12 to P14 with Ferrari not ready for their driver.

On the flip side Alex Albon was able to clear the Renault of Esteban Ocon in the pits.