Fred Vasseur: Lando Norris 'had to be penalised' in Sochi | Planet F1 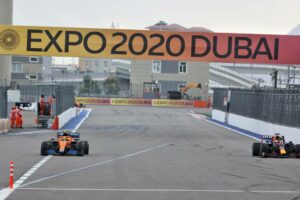 Fred Vasseur says precedents have shown Lando Norris should have been penalised for crossing the pit-lane entry line during the Russian Grand Prix.

The incident occurred when Norris belatedly stopped for intermediate tyres on his McLaren in the closing stages of a race he had led a large portion of.

Having initially tried to stay out on slicks, the Briton found himself struggling to keep control of the car as rain fell heavier on the Sochi circuit, surrendering the lead and the victory to Lewis Hamilton who had stopped earlier.

Heading into the pits, Norris veered back across the white line that marks the pit entry before gathering up the car and steering it in the direction intended.

After the race, the 21-year-old was called before the stewards but instead of receiving a penalty, he was given only a reprimand.

For Vasseur, the Alfa Romeo team principal, the outcome is relevant because if Norris had received a five-second time penalty, it would have promoted his driver, Kimi Raikkonen, to seventh position from eighth.

But while Vasseur expressed sympathy for Norris, whose decision to stay out arguably may have cost him a first F1 win, he also cited other examples where drivers who committed similar pit-lane entry mistakes had been punished.

“I’m very sad for Lando because he did a fantastic weekend at Sochi,” the Frenchman told Motorsport.com.

“But then it’s not because you like the guy and he deserved to win that we have to change the rule. The rule is crystal clear – that if you cross the line, you have to be penalised.

“It was the case on tons of occasions, for 10 times less than this, with [Yuki] Tsunoda in Spielberg, with Raikkonen last year at Mugello. And exactly the same condition with Lewis at Hockenheim in 2019.”

Technically, Hamilton’s 2019 German Grand Prix penalty was for going the wrong side of the pit entry bollard, not crossing the line, but earned the same five-second penalty.

Of Norris’ error, Vasseur added: “The advantage for Lando was mega. Because in this situation either you take five seconds or you do another lap in the wet on slicks, and you are losing perhaps 25 seconds.

“And probably a five-second penalty is not enough. I perfectly remember that when Lewis took the penalty at Hockenheim, 99% of the paddock complained it was too small.

“The question for me is that if we open the door to this kind of discussion each time someone puts a wheel on the white line, we will try to find a good reason. And we will go to the stewards and explain and show the data, and it’s an endless discussion.”

Palmer feels Norris was a match for Hamilton