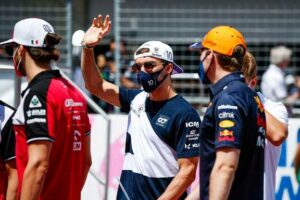 AlphaTauri boss Franz Tost has praised Pierre Gasly for the impact and improvement he has made over the course of the 2021 campaign.

Gasly is one of the most popular drivers on the Formula 1 grid and has continued to excel in his role as team leader of the Red Bull sister team following his demotion from the senior outfit midway through the 2019 campaign.

Since then, Gasly has a P2 finish in Brazil, a race win at Monza and, most recently, a P3 spot at the Azerbaijan Grand Prix to potentially further help his cause of being picked up by another big-name team. His path back to Red Bull alongside Max Verstappen seemingly blocked off.

You may think, given Gasly’s stand-out performances and consistent results over the past few seasons, we are witnessing a driver who is a finished article, but his current boss Tost believes the 25-year-old has still yet to reach the very peak of his powers.

“What’s important is I have still the feeling he can improve because that’s decisive then if you are on this level. If we provide him next year with a competitive car, he will be there 100 per cent.”

Tost went on to reveal a number of areas where he feels Gasly has improved across the 2021 campaign, showcasing a lot of weapons that the Frenchman now has in his arsenal.

“From the driving, he has now the experience of how to set up the car, how to manage the tyres, he can read the race, which is very important, he is on the radio, the questions he is asking, and he made this year another big step forward, a real big step forward.

Gasly amassed the most points he has ever scored in one Formula 1 season during 2021, 110 points in total which was aided by the aforementioned podium in Baku.

He finished in the points 15 times in total and nine of those finishes were in the top six.