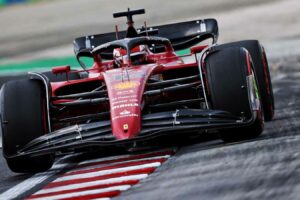 Charles Leclerc went fastest in FP2 for the Hungarian Grand Prix, but McLaren showed a strong turn of pace as Lando Norris came in behind the Ferrari driver.

The top five was rounded out by Carlos Sainz, Max Verstappen and the sister McLaren of Daniel Ricciardo, with the Woking-based team likely to be encouraged by a fast Friday showing.

Lewis Hamilton and Mercedes team-mate George Russell both struggled in qualifying trim, with Hamilton unable to make it into the top 10 and Russell only managing P8.

After Sainz took top spot in FP1, second practice would see perhaps more representative lap times as qualifying simulations would come into the equation, with the Hungaroring rubbering in and the teams turning their engines up a bit.

Medium tyres were the preferred compound in the early stages as the late-afternoon sun shone over Budapest, though the track temperature still hovered around a warm 50°C.

Leclerc set the early pace on a 1:18.911, comfortably ahead of his Ferrari team-mate in P2 after their initial flying runs.

Hamilton cut an exasperated figure on team radio after his first fast lap though, with a frustrated “1.9 (seconds) to the same tyre?” being said in response to hearing his gap to Leclerc at the top.

📻 "Car's unstable" he tells the team before returning to the pits #HungarianGP #F1 pic.twitter.com/ga9LrTsDOK

But it would not be long before the drivers pitted for soft tyres, which started the drivers’ qualifying simulations. Alex Albon was the first to start, but his bouncing Williams sent itself into a spin while braking for Turn 1.

He was able to get going again eventually, but his flat-spotted tyres were no longer of use to him.

Norris became the first driver to jump above Leclerc on soft tyres, with his 1:18.662 then quickly passed by Leclerc once again, who went two tenths faster than the McLaren driver.

Sebastian Vettel moved himself into the top five on his first soft-tyre run, with the new Aston Martin rear wing endplates having raised eyebrows in the paddock on Friday, eventually ranking P7.

But Ricciardo moved in behind Norris in the timings to make it a McLaren two-three on the leaderboard at that point, their FP2 performance underlining the potential they showed in first practice, with signs that they could be in the mix for a strong result this weekend.

Mercedes struggled for pace, with Russell voicing his concerns about his car in the hard braking zone into Turn 1, locking his right-front tyre as he tried to extract pace from the W13.

Long run practice soon took over for the final 20 minutes of the session, but not without Leclerc being forced to pit with an apparent issue with his Ferrari – briefly getting pulled into the garage for checks before being sent back out again.

Verstappen was also suffering in the car, reporting oscillations as he ran through the fast left and right-handers at Turns 4 and 11 respectively – both of which taken at speeds upwards of 140mph.

Hamilton also reported instability in his Mercedes on his long run, as he ran wide at Turn 4 and struggled to get his car working to his liking.

But it was Leclerc who came out on top in the session, with Ferrari and Red Bull joined by McLaren in showing strong one-lap pace.

There is a 90% chance of rain for Saturday’s running, so an intriguing day awaits for FP3 and qualifying.