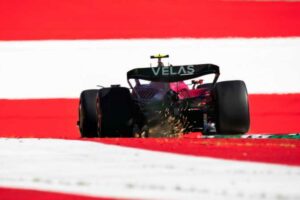 Max Verstappen continued his run of P1s for the 2022 Austrian Grand Prix, the Red Bull following up his qualifying P1 with another fastest time in final practice.

After their Friday qualifying crashes, neither Lewis Hamilton’s car, fitted with Mercedes’ spare chassis, nor George Russell’s were not ready for the start of FP2 as Mercedes opted not to use a curfew to fix them overnight. The team was still busy preparing the cars, including new gearboxes, as the pit lane light went green.

No power unit changes were necessary, Mercedes hoping to have the cars on-track midway through the session.

Pulling together and pushing flat out 👏

As soon as the cars got back to the garage after Quali, we put a recovery plan in place – three hours of work from the end of qualifying, three hours this morning 💪 pic.twitter.com/VhmiBE5KAM

Charles Leclerc set the early pace, a 1:10.3, for the Ferrari driver on the medium tyres putting him 0.03s up on Lando Norris, the McLaren straight out on the soft tyres after his Friday qualifying woes.

Leclerc upped his pace to a 1:09.6 only to blitzed by Max Verstappen, the Red Bull driver half a second quicker but running the soft Pirellis.

Russell was the first of the Mercedes team-mates to leave the pits, the Briton putting in his first lap 10 minutes in the session. A single installation lap and he was back in the pits, a brief stop and then he headed back out. His first timed lap putting him P6, 1.3s behind Verstappen who had upped his pace to a 1:08.9.

Sainz split Verstappen and Leclerc, 0.2s behind the sprint race pole-sitter, with Russell next step forward putting him P3, Pierre Gasly fifth ahead of Alex Albon.

Russell told Mercedes that his overtake button was not working into Turn 1. Told that it doesn’t look like he pressed it, he replied: “I pressed it four times!”

While their rivals laid down the laps Alpine opted to keep Fernando Alonso and Esteban Ocon in the garage for the first half an hour, not seeing much of a reason to run given that they are not permitted to change anything about the car or its set-up.

Ocon and Alonso were on track before Hamilton, the Frenchman jumping up to second place on the medium tyres with Alonso P3, making that third and fourth as Leclerc replaced Verstappen up in P1 before he too lost out, Carlos Sainz quickest with a 1:08.6.

And all the while Mercedes continued to work on Hamilton’s car, the Brit with his helmet on and waiting for the final bits and bobs. He eventually left the pits with 14 minutes remaining, P9 on his first timed lap.

The session ended with Sainz on top of the timesheet ahead of Leclerc, Verstappen, Alonso, Ocon, Sergio Perez, Russell and Valtteri Bottas. Hamilton and Norris completed the top ten.