Home » Racing » FP1: Ferrari in a league of their own at a very wet Imola track

FP1: Ferrari in a league of their own at a very wet Imola track 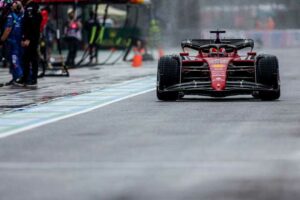 Ferrari were in a league of their own in FP1 for the Emilia Romagna Grand Prix as the only thing that impressed more than Charles Leclerc’s pace was his number of spins.

Carlos Sainz made it a Ferrari 1-2 ahead of Max Verstappen.

Never mind a day for the ducks, it was a day for the tifosi as their beloved Ferrari took to the Imola circuit for the opening practice session leading both championships, and – at least in dry weather – the favourites to take the win come Sunday.

However, it was raining and that threw up a new challenge for the drivers as they’d had yet to drive the all-new cars in the rain during a grand prix session having previously only had a brief run on a damp track the final day of pre-season testing.

The weather meant there were no immediate takers despite many of the teams, including Mercedes, McLaren and Alpine, bringing upgrades for their cars. Carlos Sainz and Esteban Ocon also had new power units.

Valtteri Bottas was the first man out, a 1:43.277 to get the timesheet rolling, Charles Leclerc spun to get that count up and running and Nicholas Latifi was the first off the track and into the gravel. But those were all the first of many…

Charles says hello to the Tifosi in his first lap 👋

He also finds himself in a spin too in the final corners 🔄😮#ImolaGP #F1 pic.twitter.com/MJq6CHRbnF

Max Verstappen went quickest with a 1:39.595, Lewis Hamilton had a big slide, Sainz cut the grass, Alex Albon did too and Daniel Ricciardo was the last man out on the track as he had an issue with his headrest. Leclerc and Verstappen resumed their season-long battle at the front as the two traded P1 times with Kevin Magnussen in the Haas up in third place.

20 minutes in and Leclerc was P1 with a 1:35.629, Verstappen was back in the Red Bull garage sitting in second place, ahead of Sainz and Pierre Gasly. Ricciardo had made his mark in 17th place, and Latifi bottom of the timesheet without a time on the board after his earlier off.

The slips and slides of the session continued as Lando Norris had a big run through the gravel at Rivazza, Leclerc lost it at Acque Minerali and mounted the kerbs with a heavy landing, and then Ocon joined Norris playing in the dirt. And Sergio Perez went quickest with a 1:35.476 to sit P1 halfway through the session.

Russell shows off his skateboarding skills as he grinds the slippery kerbs! 🛹

Less than 25 minutes remain in FP1, it's still very wet out there 😅🌧#ImolaGP #F1 pic.twitter.com/VAhu7Qqul8

Sebastian Vettel was the first driver to try the intermediate Pirellis, P5, P4, but his team-mate Lance Stroll went sliding off the track at Turn 13. Norris also adopted the green-marked tyres and shot up to second place, 0.026s down on Perez’s P1 time.

As more drivers swapped to the inters, Magnussen’s first flying lap ended in the dirt as he failed to slow for the corner, Leclerc had a third spin at Tamburello and Sainz went quickest with a 1:32.606. Leclerc bounced back from his spin to go faster and then faster still, and Sainz hit back with a 1:30.803. Leclerc’s attempt to retake P1 saw him cutting the grass at the Variante Alta.

Verstappen improved to third place but was still 1.8s down on Sainz, make that 2.7s down on Leclerc who laid down a 1:29.402 to leapfrog Sainz for P1. Verstappen upped his pace but stayed P3 with Norris briefly bringing out the reds as he put his McLaren into the gravel at Acque Minerali.

Topping FP1 ahead of Verstappen, Ferrari will go into Friday evening’s qualifying hoping for rain as will Haas with Magnussen P4 ahead of Mick Schumacher.

There was a moment of late drama as Bottas went off at Acque Minerali on his in-lap, beaching his Alfa Romeo in the gravel just millimetres from nosing the barrier.