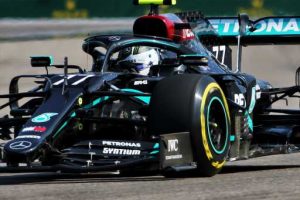 Valtteri Bottas destroyed the competition in FP1 for the Russian GP as Carlos Sainz lost a wing and Nicholas Latifi brought out the red flags.

Spicing things up for the Russian Grand Prix, Pirelli arrived at the circuit with its softest range of tyres in the hope of creating a two-stop race with a bit of degradation. Mother Nature signed up for her part, upping the temperature compared to previous seasons.

Max Verstappen, powered by a brand new Honda engine, was the first man out, doing an installation lap to check everything was in order before heading back to the pits without a time.

Mercedes was quickly into the action with Lewis Hamilton clocking a 1:37.7 on the medium tyres while Valtteri Bottas did a 1:37.3.

The 1-2, though, didn’t last long as the rest of the field left the pits to begin their morning programmes.

Russian driver Daniil Kvyat hit the front with a 1:37.1 with Sergio Perez, who doesn’t have Racing Point’s upgrades, second quickest ahead of Bottas and Kevin Magnussen.

Verstappen, on the medium tyres, took over at the front with a 1:36.7 with his former team-mate Daniel Ricciardo up to second in the Renault.

Tricky moment for Daniel Ricciardo as he runs wide 👀

But the Australian has impressed so far

However, Mercedes’ swap to the faster soft tyres changed the make up of the timesheet.

Bottas hit the front with a 1:34.9, 1.6s on Perez with Verstappen a further two-tenths down.

Carlos Sainz brought out the first yellow flag as he got it wrong at Turn 7, spun his McLaren and hit the barrier damaging his rear wing.

The Spaniard limped back to the pits leaving behind a few pieces of wing on his way. That became a Virtual Safety Car as the marshals picked up pieces of wing.

The drivers all went back into the pits with Antonio Giovinazzi the only one without a time on the board at the 40-minute mark. He had, however, covered six laps.

Hamilton was the first back out when the drivers were given the green light, the championship leader leaving the pits on a set of hard tyres.

The Brit had a lock up that caused a flat spot. He reported that “these tyres are done”.

Bottas left the pits on a new set of mediums and he too had a bit of a lock up, although he managed to run down a small escape road, avoiding a massive flat spot.

As others left the pits the session was red flagged with Nicholas Latifi putting his Williams into the barrier. “I crashed,” he said.

He ran a bit too wide at Turn 10, lost the back end of his Williams and hit the barrier with the rear of the car before slamming back into it with the left side of the FW43.

Adding to the drama, a fire extinguisher went off by itself at the back of the Red Bull garage.

The session resumed with 27 minutes on the clock and Verstappen on the soft tyres. He leapt up to second place but was still 0.6s down on Bottas’ best.

Romain Grosjean added to the incident list with a spin at Turn 13 before Ricciardo slotted into second, 0.5s off the pace.

Verstappen and Pierre Gasly were both left swearing at the traffic.

The session ended with Bottas quickest ahead of Ricciardo, Verstappen, Perez, Lance Stroll and Ocon.

Hamilton was P19 as he focused on race pace on the hard tyres.