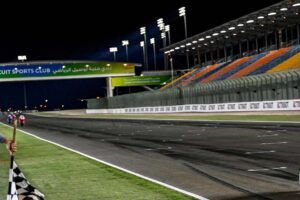 Formula 1 has responded to a plea from Amnesty International urging drivers at the new Qatar Grand Prix to speak out about ‘sportswashing’.

In the third week of November, F1 will head to Qatar for the first time to complete a triple-header of races that begins in Mexico and Brazil.

The Losail circuit, which already stages MotoGP, has been chosen to host round 20 of this year’s World Championship on November 21, and that means the last three races of the campaign will all take place in the Middle East.

Not only has Qatar been squeezed into this year’s pandemic-affected calendar, it will also take on a 10-year residency from 2023, potentially as a street race in the capital, Doha.

That contract does not begin next year because the country is preparing to stage football’s World Cup in November/December 2022.

Amnesty International have described Qatar’s human rights record as “extremely troubling” and in a statement have urged F1 to “insist all contracts pertaining to this race contain stringent labour standards across all supply chains”.

The statement added that “drivers and their teams should be prepared to speak out about human rights in Qatar in the lead-up to the race, doing their bit to break the spell of sportswashing and image-management”.

It has been reported that several thousand migrant workers employed on construction sites for World Cup facilities have died since Qatar was awarded the tournament in 2011.

In response to Amnesty, Formula 1, as reported by the BBC, said: “For decades, Formula 1 has worked hard to be a positive force everywhere it races, including economic, social and cultural benefits.

“Sports like Formula 1 are uniquely positioned to cross borders and cultures to bring countries and communities together to share the passion and excitement of incredible competition and achievement.

“We take our responsibilities on rights very seriously and set high ethical standards for counterparties and those in our supply chain, which are enshrined in contracts, and we pay close attention to their adherence.”

‘Sportswashing’ is a concept resembling a charm offensive in which sporting events are used to try and enhance a country’s global image to deflect criticism from outside.