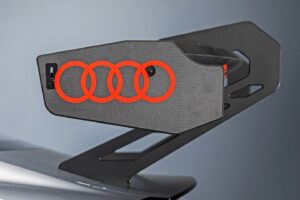 “You just run out of arguments” said VW CEO Herbert Diess. Those arguments were about whether or not the VW Group should enter F1. and now it is, after the board finally gave the green light. And not only with one but two entries, under its Audi and Porsche brands. The last time the group was in discussions with the F1 circus was at the start of the last decade, when the current, highly complex hybrid era was being formulated. At the time that option was not taken. However, with a simplified engine formula set to begin from 2026, the opportunity was apparently too good to miss.

Speaking in recent interview originally broadcast on YouTube, Diess remarked: “You can’t enter Formula 1 unless a technology window opens up, which means, in order to get in there, a rule change – so that everyone starts again from the same place. As Markus Duesman [chairman of the executive board of Audi and former BMW F1 head of powertrains] always tells me, you usually make up one second per season on a medium-sized race track simply by optimising details. But you can’t catch up on that when you join a new team: you need five or ten years to be among the front runners. In other words, you can only get onboard if you have a major rule change.”

The new engine formula hasn’t been ratified yet, but it’s rumoured to be well on the way to being signed off and VW Group has been involved in this process from the start. Since 2014, F1’s rules dictate a V6 petrol engine with two energy recovery systems: the MGU-H, which recovers and deploys energy from the turbocharger, and the MGU-K, which functions much like a standard road-going brake regenerating system, recovering kinetic energy during the braking phase.

The gist of the proposed 2026 formula is removing the highly complex MGU-H element – this is very costly and seen as having limited use in road cars. The same basic 1.6-litre V6 ICE architecture would remain, but using a standard turbo and the MGU-K element made more powerful. The plan is for it to produce 50 per cent of the power unit’s total output. The proposals also include running on 100 per cent sustainable fuel.

Diess went on to endorse the value of F1 as a marketing tool. “The marketing that is happening there, plus Netflix, has led to Formula 1’s following growing significantly in the U.S. as well. Asia is growing significantly, including among young customer groups. If you look at the major sporting events or events in the world, it’s the case that in motorsport, it’s really only Formula 1 that counts and is becoming increasingly differentiated. If you do motorsport, you should do Formula 1 as that’s where the impact is greatest.”

Porsche’s entry is said to be the most developed. It will likely partner Red Bull as an engine supplier, taking over the Red Bull Powertrains department in Milton Keynes. This was set up to assume control of the works Honda F1 engine programme after the Japanese company left the sport at the end of last year, having secured the F1 driver’s championship with Max Verstappen. The team would be branded Red Bull-Porsche.

Audi’s situation is less clear. The rumours suggest it will enter as a team in its own right, rather than as an engine supplier like Porsche. This mirrors the route the Mercedes-AMG Petronas F1 Team took when it entered the sport in 2010, by buying and rebranding the Brawn GP team. Audi is said to have had talks with Aston Martin, McLaren, Sauber and Williams about a buyout.

Diess confirmed that the VW brand is not part of the F1 plans: “It doesn’t fit and the brand will not participate” whereas “Porsche and Audi having big ambitions for increased sales in the long term, a move to F1 was a no-brainer – especially with analysis showing that F1 programmes could help deliver a profit for the two car companies.”

“Porsche has to be the sportiest car brand in the world – so Porsche has to do motorsport,” he said, and “if Porsche does motorsport, the most efficient thing is to do Formula 1. Audi is a much weaker brand than Porsche. It can’t demand such a high price premium. Audi actually has the better case for Formula 1 because it has much greater potential for the brand.”

It’s certainly a ringing endorsement of F1 as a global sport and of its efforts to bring about a more cost-effective engine solution that is still seen as relevant to the big automotive players. At the same time, the recently introduced budget cap means that the huge cost of running a championship winning F1 team has been brought down, along with closer racing thanks to the new rules introduced at the start of this season.

These were a move to reduce the downforce generated by the upper surface of the cars – the front and rear wings and the very complex array of winglets that directed the airflow. This worked the air very hard over the car, creating high levels of turbulence that meant the car behind lost downforce and struggled to follow closely and overtake. This year’s rules rely more on ground effect. Now much of the downforce is produced by the shaped underbody, which creates less of a wake. It means the cars behind can follow more easily and, so far, the evidence – both on track and from the drivers’ feedback – seems to suggest it’s the right direction.