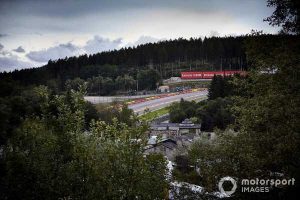 Formula 1 travels to the Spa-Francorchamps circuit this weekend for the Belgian Grand Prix. Here’s you can watch the race in the comfort of your living room.

While Mercedes set the pace in the opening practice on Friday, Max Verstappen put Red Bull on top in the more representative FP2 session, potentially setting up the foundation of a thrilling two-way battle between the two F1 giants.

Lewis Hamilton said after practice that Red Bull has the edge over Mercedes, while Verstappen on the other hand downplayed his chances, saying Red Bull may not be able to fight the German manufacturer for pole position.

When is the Formula 1 Belgian Grand Prix?

The Belgian Grand Prix will be held on August 30th at the Spa-Francorchamps circuit.

Can’t find your country or region in the list? Check the Formula 1 schedule page for the broadcast times in your local timezone.

How can I watch Belgian Grand Prix?

The Belgian Grand Prix will be broadcast live in nearly every country around the world.

Europe: Sky TV has the exclusive rights for Formula 1 broadcast in the UK and Italy. Movistar F1 will broadcast the race in Spain. Viewers in France can tune into Canal+.

North America: The Belgian GP will be broadcast in the US on ESPN, in Mexico on Tudn and in Canada on TSN/RDS.

Asia: Most of Asia is covered by Fox Sports, including India where F1 is broadcast by sister channel Star Sports Select 2. Fuji TV Next will carry live coverage in Japan.

Oceanica: Fox Sports 506 will bring live coverage from Spa to viewers in Australia. Spark Sport will show the race in New Zealand.

Can I stream the Belgian Grand Prix?

Viewers from selected countries can subscribe to F1 TV to stream the race on a device of their choice. Sky Sports and Movistar offer live streaming in the UK and Spain respectively, with the latter’s package costing seven euros a month.

There is a 30% chance of rain on Sunday. Temperature will remain low throughout the day, hovering between 11C to 17C.