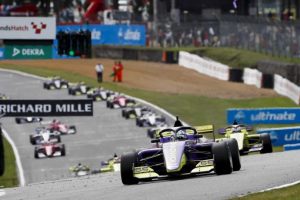 Conceived as a way to give women a leg up through the junior ranks of motorsport, the women-only Formula 3 category W Series has been the subject of dispute since day one. Its critics haven’t exclusively been jealous men, either; women with established racing careers such as Pippa Mann and Tatiana Calderon have scorned the series as a “step backward.” In spite of this, though, the seemingly controversy-keen Formula 1 aligned itself with the series, announcing Thursday that W Series will run among its support categories starting in 2021.

F1 declared W Series will become a staple of its support categories, which include the likes of the Porsche 911 GT3 Cup and Ferrari Challenge, “for 2021 and beyond,” signaling years of W Series support races to come. 2021’s calendar of up to 23 Grands Prix will feature eight such support events.

Which races will host W Series have yet to be announced, though F1 could theoretically use the category as a shield to deflect criticism stemming from its addition of Saudi Arabia to the 2021 race calendar.

Campaigning W Series there and in other countries that deny women the rights it grants men could silence western critics, though it would come at the cost of provoking conservative locals, something that F1 seems unwilling to do. Under the ownership of Liberty Media, F1 has embraced its status as a mass entertainment product more than ever, and that has meant cozying up to wealth, irrespective of where it comes from.