Formula 1 2022 results: Hungarian Grand Prix at the Hungaroring near Budapest 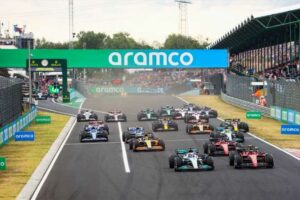 Here are the complete results from the Hungarian Grand Prix, which was won by Max Verstappen for Red Bull from 10th place on the grid.

The World Champion had suffered a power-unit issue in Q3 which meant he started in the midfield, but he overcame that disadvantage brilliantly to further extend his commanding margin over Charles Leclerc in his Drivers’ title defence.

Verstappen led home Mercedes duo Lewis Hamilton and George Russell for an exact repeat of the podium from the previous weekend’s French Grand Prix, with Carlos Sainz the leading Ferrari in fourth.

Max Verstappen brilliantly wins the #HungarianGP from 10th on the grid!

Lewis Hamilton and George Russell round out the podium, but once again, what might have been for Ferrari… #F1 pic.twitter.com/THYn99BleD

Rain appeared to be not too far away when the race began, but everyone started on dry tyres and pole-sitter Russell led until changing his soft tyres for mediums on lap 16. However, after the first round of pit-stops the Mercedes man retained the lead, but the Ferraris in second and third had swapped around with Leclerc leapfrogging Sainz.

After a battle for the lead, Leclerc got past Russell into Turn 1 on lap 31 with a move around the outside and they both made their second stops on lap 40. Russell, however, was undercut by Verstappen, who then passed Leclerc on the following lap to claim the net lead – which he briefly gave away with a spin.

On lap 45, Verstappen was back ahead and Leclerc, who had been put on hard tyres in contrast to his main rivals, found himself under pressure from Russell who took second place from the Monegasque. Ferrari then called in Leclerc for a third pit-stop, this time for soft tyres and he dropped to sixth.

The Scuderia lost another position when Hamilton passed Sainz for third place on lap 63 with the fresher soft tyres of the duo, and the seven-time former World Champion then moved up to second ahead of his team-mate Russell two laps later.

Although rain threatened throughout the 70-lap race, it never materialised until the dying moments and Verstappen came home unchallenged – helped by a late Virtual Safety Car for Valtteri Bottas’ retirement – on another day to forget for Ferrari.