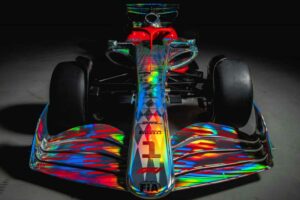 Formula 1 has given the world a first glimpse of what it hopes its cars will look like under new regulations in 2022.

A full-scale car was presented on Thursday, at Silverstone, ahead of this weekend’s F1 British Grand Prix at the venue, with all 20 drivers taking part in a special photo shoot on the circuit’s pit straight.

Formula 1 previously displayed a 50 percent scale wind tunnel model to the media at the 2019 United States Grand Prix in Austin, Texas, upon ratification of the new regulations, which were set to be introduced for 2021. That time frame was pushed back by 12 months as part of the widespread cost-cutting measures taken during the initial weeks of the COVID-19 pandemic.

Formula 1 hopes the new regulations will promote closer racing and overall competition, reducing the impact of downforce-driven dirty air, facilitated by tires that are less sensitive to thermal degradation. Those tires will be of size 18-inch, up from 13-inch, and will feature wheel rims. Formula 1’s feeder series, Formula 2, has used the larger size since 2020, while Pirelli has been carrying out tests on the new-for-2022 size for a couple of years.

Aesthetics are also part of the new equation, with sweeping bodywork, simplified front wings and rear wings of a slightly different shape and dimension part of the new design philosophy. The engine formula will remain unchanged until 2026 though the quest for greater equality long-term has been assisted by the introduction of the new-for-2021 budget cap.

Several components will also be added to the list of standard parts in order to help alleviate costs. It is the biggest overhaul to the technical regulations in a generation. The reduction in downforce, as well as a weight increase, means the 2022 cars—at least to begin with—will be slower than the current machines.

“It feels like a very long time ago the FIA officially unveiled the regulations for the future of the sport, but after the one-year delay due to the pandemic it’s only 170 days to go until the start of 2022 when we will see the next generation of Formula 1 cars take to the track,” said Formula 1’s managing director of Motorsports Ross Brawn.

“There is huge excitement ahead of this new era, and while 2021 has been a great battle we still have cars struggling to follow each other during the race. The regulations for 2022 will address this problem and create an opportunity for closer battles and more wheel-to-wheel racing. The combined effect of the new aerodynamic regulations and financial rules, in the form of the cost cap, will create the conditions for a more balanced championship and for the gaps across the grid to close.”

Addressing that performance difference has been a key target for Formula 1. Only Mercedes and Red Bull have won world titles since 2010 while in the turbo hybrid era, which began in 2014. Those two teams—along with Ferrari—have swept up the majority of victories. Out of the over 100 Grands Prix in this era only AlphaTauri and Racing Point (now Aston Martin) have claimed just one win apiece outside of the big three.

“It’s interesting, it’s very different to what we are used to,” said F1 points leader Max Verstappen of Red Bull Racing. “The most important thing is we improve the racing and if that’s the way forward I’m for that.

Seven-time champion Lewis Hamilton says that the new car could dramatically improve the show for the fans.

“2022 will be a serious challenge, getting used to a new era of car, and if it enables us to follow and race like it’s planned to it’ll be amazing for the fans and for the sport,” Hamilton said.

This, however, is F1’s vision of the new-for-2022 technical regulations. Teams, as ever, will be searching for loopholes, clauses, as they decipher the regulations for maximum performance. F1 itself is hoping it has shut off any potential loopholes. After all, Ross Brawn’s presence on Formula 1’s leadership group, along with the likes of Pat Symonds and Rob Smedley, is a classic poacher turned gamekeeper move from the championship.

Brawn’s eponymous team was one of a handful to master the controversial double diffuser in the new-for-2009 regulations, facilitating its shock rise to the title. Stepped noses, phallic noses, and the designs and shapes of bodywork pieces through the years have all been legal courtesy to interpretation of the regulations.

Whether the 10 teams produce racing cars that truly reflect Formula 1’s own vision will only be seen when the new machines are presented next February.