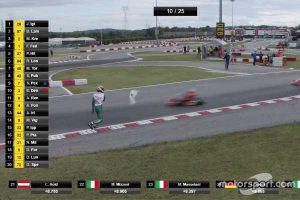 Felipe Massa says those involved in the fight during a karting event at Lonato on Sunday will face “consequences” for their “unacceptable” behaviour as the FIA announced it has launched an investigation.

The motor racing world was left in shock at the weekend when video footage of two incidents at the FIA World Karting Finals in Italy surfaced.

Italian driver Luca Corberi, who had entered in the KZ category, was first seen detaching a bumper from his crashed kart and waiting at the side of the track.

Then he attempted to throw his bumper at rival Paolo Ippolito, who he had been involved in a collision with shortly beforehand.

The bumper missed Ippolito and bounced harmlessly off another kart. Corberi then ignored officials trying to get him away from the side of the circuit.

After the race, a fresh video emerged of Corberi appearing to attack Ippolito in parc ferme, with a mass brawl breaking out involving several unidentified individuals.

Former world champion Jenson Button said that Corberi and his father, who owns the circuit, should even face lifetime bans from competition.

Button wrote: “Luca Corberi has just destroyed any chance he had at a racing career after his disgusting behaviour today at the FIA Karting World champs.

“His father owns the circuit and is seen power driving the guy into a wall. Life ban for both of these idiots please.”

Massa, who has been president of the FIA’s karting commission since December 17, was present at the Lonato track on Sunday and was aware of the incident.

Having stayed silent about the matter for several hours, however, he posted on Instagram on Monday that action would be taken against the individuals involved.

He wrote alongside images of the two incidents: “This behaviour is unacceptable in our sport. Those individuals will face the consequences of their action.”

Corberi was disqualified from the Lonato event for what happened, while Ippolito was also excluded for his part in the original collision which triggered the controversy.

The FIA has launched an official investigation in to what happened on Sunday.

In a short statement it said: “The FIA and ACI are deeply concerned by the disturbing events that occurred yesterday during the FIA Karting KZ World Championship in Lonato, Italy involving drivers, team members and track officials. The FIA has launched an immediate investigation in to the incidents.”