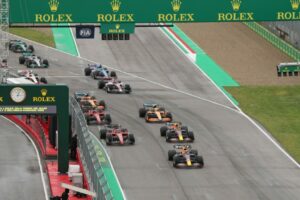 The FIA has ‘now elected’ to look into the drivers’ brake dust concerns after Sebastian Vettel with his black-speckled face raised the issue after the Austrian GP.

Vettel faced the media after Sunday’s grand prix at the Red Bull Ring with his face sporting black speckles.

The Aston Martin driver revealed that was carbon from his AMR22’s brake dust.

“To be honest with you, that is something they need to work on because the design of the brake ducts this year, with the front axle, it is blowing all the brake dust into our faces and it is not good,” he told Sky Sports after the race.

According to Motorsport.com, motorsport’s governing body has confirmed it will look into the issue.

Seb spoke after the race with a definite visor line where the dust didn't get to him. #AustrianGP 🇦🇹 #F1https://t.co/dbf3k8gDWM

The publication reports that the ‘FIA was made aware of Vettel’s concerns immediately after the Red Bull Ring race, and has now elected to look into the matter.

‘With the issue being taken seriously as it is one that involves drivers’ health and safety, the FIA has tabled the subject on to the agenda of the next meeting of the Sporting Advisory Committee, which is made up of team members, to see what action can be taken to improve matters.’

Vettel is not the only driver who is concerned about the effects brake dust is having on the health of the drivers.

Valtteri Bottas said it has been a problem for many years, but he does “not know if there is anything that can be done.

“For sure there is some dust from your own brakes but that is minimal. It is the cars ahead, it is always going to be there.

“Any time after the race when you sneeze it is black, so year after year, I am not sure what it does to your body. No idea.

“I think no one ever looked into it. I would rather be breathing clean air but not sure what can be done.”