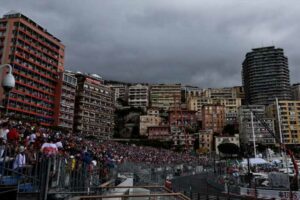 The FIA said they were monitoring a “severe downpour” heading for Monaco when they took the decision to delay Sunday’s grand prix.

Shortly before the race was due to begin, the weather started to take a turn with drops of rain falling on the Monte Carlo track.

It was announced the race would not begin at its scheduled 3pm local start time but instead at nine minutes past the hour.

That was then delayed again, along with news that the formation lap would be conducted behind Bernd Maylander’s Safety Car.

The delay seemed in contrast to the weather conditions with rain still not falling too heavily, leaving drivers such as Max Verstappen to ask over the team radio why there was even a delay.

However, the heavens opened and the rain fell harder than at any point throughout the race weekend. The race was then red-flagged and the drivers sent back to the garages.

Explaining their decision, the FIA said they had been monitoring the radar for a severe downpour that was approaching the circuit.

“Race Control was monitoring a severe downpour that was rapidly approaching the circuit,” the statement read.

“As it arrived during the start procedure, the SC start and its associated procedures were implemented. This was done for safety reasons in consideration of no wet running this weekend.”

Forty five minutes after the race had been meant to start, the drivers remained out of their cars and in the pits.