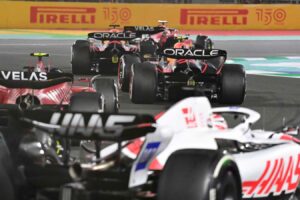 FIA head of single seaters Nikolas Tombazis has proclaimed that power unit performance across the grid is largely similar, now the engine freeze has come into effect.

Mercedes, Ferrari, Renault and Red Bull Powertrains have all created their new 2022 power units with the knowledge that the engine regulations have been largely frozen until the proposed arrival of Formula 1’s new engine specification in 2026.

Naturally, this leaves very little wiggle room for teams to improve their engine performance, so anyone left behind would have an even harder time than usual in trying to catch the pack.

Tombazis insisted that the teams would not allow one manufacturer to be cut adrift if their power had a significant deficit to their rivals, as those in the sport want to see the constructors able to compete on a relatively even keel on the power unit side of things.

“None of the four manufacturers have problems at the moment, the performance is similar,” Tombazis La Gazzetta dello Sport, per SoyMotor.

“When we discussed introducing the freeze, we determined that, if one was in difficulty, everyone would engage in good faith to discuss how to solve the problem, perhaps allowing for some development. There is no interest in sentencing someone to be left behind for four years.”

Tombazis’ words should quell any concerns around the Mercedes power units, considering the relative lack of straight-line speed the factory and customer teams (McLaren, Williams and Aston Martin) have had in the early part of 2022, which Toto Wolff described in Bahrain as Mercedes being ‘over-winged’, thus creating more drag than required.

Tombazis added that the FIA did not intend to freeze the regulations for such an extended period, but said it was a necessary measure for the teams while a new engine formula is developed, which is hoped will help tempt Volkswagen into the sport through Audi and Porsche.

“It’s not ideal to freeze engines for a long time, but we had to do it because it would have been unsustainable for the manufacturers to develop these units and the ones that will be introduced in 2026,” Tombazis concluded.