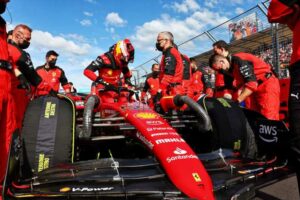 Ferrari will introduce their final batch of engine upgrades in May, first the ERS at the Miami Grand Prix followed by the MGU-K, battery and control unit one race later in Spain.

That’s according to the Italian edition of Motorsport.com.

This year’s championship is off to an almost perfect start for Ferrari with Charles Leclerc taking two of the opening three race wins, and P2 in the other race, while Carlos Sainz has also twice been on the podium.

As such Leclerc is leading the Drivers’ Championship by 34 points while Ferrari have a 39-point lead in the Constructors’ standings.

But while Ferrari will continue to bring various upgrades for their F1-75 throughout the season, time is running out for the team to update their power unit and all its hybrid parts before the September homologation deadline.

According to Motorsport.com, the team will introduce their upgraded ERS at the Miami Grand Prix followed by a new MGU-K, battery and control unit in Spain.

‘Initially,’ the publication reports, ‘the plans was to bring this package of novelties to Spain given that the 066/7 engine 2 will be used in Barcelona, but in reality the results obtained from the simulations are positive, so there is the desire to anticipate this evolutionary step’ in Miami.

‘The new hybrid should ensure an increase in power as well as ensure more electric strategies, in compliance with the reliability parameters.

‘Ferrari is aware that there was time to develop solutions until the end of the summer, but they want to benefit from the new solutions as soon as possible in an attempt to create a greater gap to Max Verstappen’s Red Bull.’

Both Haas and Alfa Romeo will also benefit from the upgrades.

Meanwhile on the aerodynamic side, Ferrari are expected to trial a new floor at the Emilia Romagna Grand Prix in the hope of resolving their porpoising issues.

Although by no means on the same scale as Mercedes, it was evident at the Australian Grand Prix that the F1-75 suffers with severe porpoising at high speeds, Carlos Sainz’s head notably bouncing around at the end of the straights.

Ferrari are hoping that between the new floor and the upgraded engine they can build their advantage over Red Bull and Mercedes before last year’s powerhouses resolve their issues.

While Red Bull have suffered with poor reliability this season, the team recording three DNFs in three race weekends, Mercedes’ W13 is lacking in pace as the team is having to raise the car’s ride-height in order to lessen their porpoising issues.