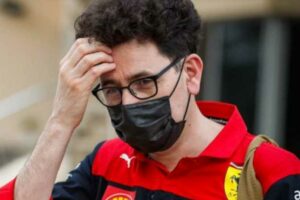 Watching Ferrari’s dreams of a championship double implode, Mattia Binotto may have a calm façade but he’s insists he is as “frustrated” as everyone else.

Beginning this season at a canter, the Prancing Horse raced out to a 34-point lead in the Drivers’ Championship with Charles Leclerc scoring maximum points in two of the first three races.

But with just one win in the following 10, he now trails Max Verstappen by 80 points, the size of the deficit meaning even if he wins everything after the summer break he cannot win the title without the Red Bull driver dropping points.

Ferrari have, it is fair to say, only themselves to blame.

The Scuderia’s reliability and poor decision making has cost the driver 108 points in total while Leclerc’s own mistakes saw him drop a further 32.

Such was Leclerc’s exasperation after the Hungarian GP, a race he should have won but instead finished P6, that he told the media it feels “like there is always something going wrong” at Ferrari.

He’s not the only one annoyed with the situation.

“I’m frustrated no doubt,” team boss Binotto insisted to Channel 4 after the Hungarian race, “even if I’m maybe not showing it too much, but I’m certainly frustrated.

“Because I know what is the potential of the car, what it has been so far, even if today it’s the first time in the first half of the season that the car was not so great.”

Not for the first time Binotto stated that it was the pace of the car, not the strategy, that cost Ferrari at the Hungaroring on Sunday.

However, the team went for a baffling strategy when it came to Leclerc, running him medium-medium-hard.

Put to him that it wasn’t even a strategy that tyre manufacturer Pirelli believed anyone would opt for, he said: “We knew that the hard tyres would have been difficult in warm up for a couple of laps, then they would have been slower to the medium for at least 10 or 11 laps.

“But it was a very long stint, it was 30 laps stint, so we hoped by the end of the stint they would have come back and put some time to the car ahead.

“We stopped to protect position on Max at the time, knowing it was a 30-lap stint, knowing that the first part would have been difficult, but hoping for the second half of the stint. But it didn’t work.

Ferrari are also behind in the Constructors’ Championship. Having been 49 points ahead of Red Bull, they now trail the Milton Keynes squad by 97 points.