Home » Racing » Ferrari stop all development on their 2021 challenger

Ferrari stop all development on their 2021 challenger 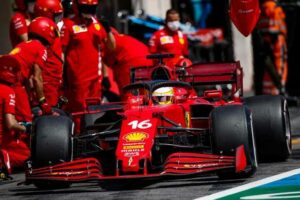 All eyes have turned to 2022 at Ferrari, with the Scuderia confirming they are no longer developing their 2021 challenger – the SF21.

The SF21 has represented progress at the Prancing Horse as they have emerged from the boggy bottom of the midfield battle in 2020 and propelled themselves into a fight for P3 in the Constructors’ standing with McLaren.

But, if they are to see off their age-old rivals for the top spot behind Red Bull and Mercedes in 2021, they will be doing it with pretty much the same car now throughout the rest of the campaign.

With a regulation reset on the way in 2022, Ferrari want to have as much time and resources possible working on their new car for next season.

#OnThisDay one year ago at 6:30am, @Charles_Leclerc woke up the whole of Maranello with the best alarm clock ever ⏰

A day we were honoured to share with our #Tifosi not just in Maranello, but all around the world 🌏

“From a car development point of view, we have already made our decisions,” Mekies said via Formula1.com.

“It is all on 2022, and there will be no real upgrade coming to improve these weaknesses [on the SF21].

Back to the here and now at the French Grand Prix, Mekies is expecting a tougher weekend after watching his team secure back-to-back pole positions at Monaco and Baku respectively.

“We said going to Baku that the sequence of races that now arrives is less favourable to the characteristics of our car.

“It means that we saw many times now that we are quite strong in the slow corners.

“A bit less strong in the medium and high speed corners.

“So for sure we don’t expect to do the pole, it will probably be a tough fight in the midfield, but we’re here precisely to try to understand if we made steps forward or not.”

Mekies was also asked about Ferrari’s stance on the ongoing fall-out from the Pirelli tyre blow-outs in Baku.

A new, updated Technical Directive has been issued by the FIA over tyre monitoring and pressure levels, something which Mekies has welcomed.

“We’re always satisfied when someone adds controls,” he said.

“The new TD does not change anything to the way you use the tyre. It changes the fact that the FIA added some controls to make sure the rule is respected as much as possible.

“So if one respected the rule before, it is completely transparent for everyone. For us apart from the regulation, it’s our responsibility to give our drivers a safe car, so this is the first priority.”