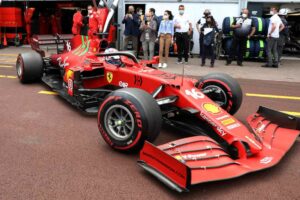 After a rollercoaster weekend for Leclerc that saw him take pole position at his home race before not being able to start at all, he and his Ferrari team landed at the Circuit Paul Ricard to run Pirelli’s new 2022 tyre designs in wet weather.

The Monegasque managed to clock up 83 laps in the morning session at the beginning of the team’s two-day test with Formula 1’s tyre supplier, as he ran the new intermediate before lunch and moving on to the full wets in the afternoon.

Mercedes had also been pencilled in to run the new wet tyres in France, but pulled out of the running due to concerns surrounding the team’s budget cap for the season.

That’s 83 laps done at @PaulRicardTrack this morning for @Charles_Leclerc and @ScuderiaFerrari on the 2022 #Fit4F1 18-inch intermediates. Now it’s time to use full wets for the afternoon session! @F1 @fia pic.twitter.com/ZkNevrzKWO

After Leclerc’s running on Tuesday, team-mate Carlos Sainz, fresh from his P2 finish in Monte Carlo, is set to take over driving duties for Wednesday in what is Ferrari’s fourth test with Pirelli in 2021 so far.

The new tyres, which are moving to an 18-inch construction from their current 13-inch form, have already seen their dry compounds tested several times by different drivers and teams.

Most recently, Red Bull reserve Alex Albon and Alpine reserve driver Daniil Kvyat ran test days in Barcelona for the new Pirelli rubber. All teams have been offered the opportunity to run a blind test for what will go on their cars next season.

Pirelli boss Mario Isola said recently that the manufacturer are “80-90%” of the way to finalising the tyre construction for their 2022 specification, so their focus will soon be switching to the compounds themselves, with the wets and inters being trialled in Le Castellet.

After a break for lunch, Leclerc went back out on the full wets and ran for 58 laps as the tyre manufacturer collected 141 laps of valuable data ahead of their big change for next year.

End of a solid day’s work for @Charles_Leclerc at @PaulRicardTrack with @ScuderiaFerrari: 83 laps on the 2022 #fit4F1 18-inch intermediates and 58 laps on the full wets. Back on track tomorrow for second day! pic.twitter.com/u1lggLSWxg

Alongside that, Leclerc was offered an insight into how the new tyres will perform – as well as give himself a chance to run around Paul Ricard ahead of next month’s French Grand Prix.

After the completion of Ferrari’s running, four more tyre tests are planned in Austria, Silverstone, Budapest and another wet tyre test at Magny-Cours – which was on the Formula 1 calendar until 2008.