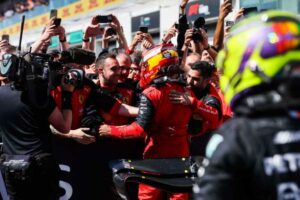 Mattia Binotto is convinced it is only a matter of time before Carlos Sainz is a Formula 1 race winner, saying it will happen “soon”.

After a torrid crash-strewn start to his season, Sainz has scored in four of the last five grands prix including three podiums.

His latest was at Sunday’s Canadian Grand Prix where the Spaniard harassed Max Verstappen after a late Safety Car but wasn’t able to close the final metres needed to make a pass.

He crossed the line just under a second behind the Red Bull driver.

Up to seventh on the list of most races without a win, Binotto believes his driver will “soon” climb to the top step of the podium.

“Sainz is driving better than at the beginning of the season and will soon take his first victory,” Binotto declared as per Corriere dello Sport.

“Today he had something more and it is a pity that he did not win.

“Without a little mistake perhaps he would have made it, but he was good at keeping the pace and attacking until the last lap.”

That first win was just out of reach, but nonetheless a superb drive from @Carlossainz55 👏#CanadianGP #F1 pic.twitter.com/MMxXLlQvpR

Sainz has three runner-up results already this season with Sunday’s by far the closest he has come to winning.

“I gave it my all to pass the Red Bull,” he said, “but to overtake here you need a bit more than two or three extra tenths.

“Even though I’m disappointed at not getting the win, there are many positives to take from Canada.

“We were the fastest on track and I felt much better in the car, being able to push constantly throughout the race.”

Ferrari need him and his team-mate Charles Leclerc to push as they have not won a grand prix since the Monégasque driver’s P1 at the Australian Grand Prix.

Red Bull have since gone on a run of six successive race wins and lead both championships.

“This year we have to attack in every race,” Binotto added. “Theoretically here in Montreal we had to defend, but we have gained a little bit in the Constructors’ classification.”

It could have been more had Leclerc not been forced to start at the back of the grid due to his engine penalty.

“For Leclerc we knew instead that it would be a race of patience,” said his team boss. “Fifth place starting from the fund is a good result.”

“The next four races will be crucial,” he concluded.