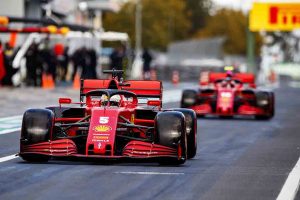 Ferrari’s sporting director, Laurent Mekies, thinks there will be surprises in store at the Eifel Grand Prix.

The weather conditions at the Nurburgring were always expected to have quite a significant impact on the race and Friday very much matched those expectations.

Persistent rain and fog that refused to budge all day ensured that both first and second practice were cancelled. That meant there was just a solitary one-hour practice session on Saturday before the drivers and teams were thrown straight into qualifying at a track Formula 1 hasn’t been at for the past seven years.

With no valuable long-run data to draw upon heading into Sunday’s race, Ferrari think the finishing order could look very different to the qualifying order.

“I think if someone could draw the relative race pace now, they would be very, very talented,” Mekies said, as quoted by MotorsportWeek.com.

“I don’t think it will be an exact reflection of qualifying at all. I think there will be surprises because we haven’t had the chance to do the long runs.

“So, that part of the tyre life and performance is an unknown, we’ll make a good challenge in terms of how fast teams will be able to read the race in the opening laps and to adapt to whatever is going to be thrown at us.

“It’s probably a good format for everybody to get a little less perfection.”

The fact that the weather forced the Eifel Grand Prix weekend into a two-day event has once again prompted the question of whether four hours of practice on a usual race weekend is a little excessive.

From Ferrari’s perspective, the shortened practice time is a challenge they are happy to embrace.

He added: “As a team we are all competitors and racers and its a very challenging and positive aspect to go into the race with the consciousness you will need to read something you haven’t prepared for and to react to, so that’s very good.

“That’s a challenge we are all embracing.

“There is a lot of different answers you will get into these sorts of weekends because again all the teams are putting a huge effort into preparing before they arrive with simulations, all these would be to try and to be in the best possible shape on Friday.

“But then of course on Friday, you learn just a lot, to what the reality of the racetrack is from whatever your information has told you.

“Somehow to have a weekend without that, is also giving us indications about our preparations, so there are always things to learn and will want to improve on such a weekend.”