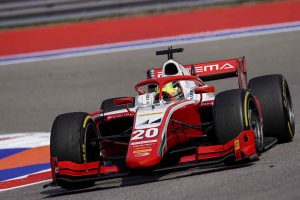 Ferrari principal Mattia Binotto says a decision on which of their junior drivers gets a shot in Formula 1 next season is just “weeks away”.

While the likes of Red Bull have struggled in recent years to find a strong number two driver from their programme, Ferrari are at the other end of the scale and right now find themselves with more excelling juniors than available F1 seats for them.

At the front of the queue are F2 Championship leader Mick Schumacher, his closest title rival Callum Ilott and Robert Shwartzman.

Alfa Romeo have already confirmed that Kimi Raikkonen and Antonio Giovinazzi will stay with the team for 2021, so the two seats which will become vacant at Haas for 2021 are the only real openings for the Ferrari prospects.

Schumacher is said to be the front-runner, with fellow F2 star Nikita Mazepin is also strongly linked.

And Binotto says a decision will be made on which Ferrari junior gets the nod in the coming weeks, most likely before the F2 finale in Bahrain.

“I don’t think we will wait for the final race in Bahrain or for Abu Dhabi. I think it’s something we’ll decide within the next couple of weeks,” he said via Formula 1 website.

“As we said, there is not a place for all of them, I think they are all doing well in F2 at the moment, if we are considering Mick, Callum and Robert.

“They’ve got a season to finish, they are all currently focused on the next race in Bahrain – they are challenging for the championship, which is very important for them.

“There will be an opportunity to run again in FP1 in Abu Dhabi, and then there might be young driver tests still in Abu Dhabi, but we make our own decision and the decision will be done on how they’ve done so far, [how] they’ve developed – their potential.

“Our objective is not to bring them into F1; it’s to bring them one day into Scuderia Ferrari – in the red cars – and whatever will be the path to achieve it, that’s less important.

“There will be one of those drivers that will have a seat in F1 next year, the others will have opportunities and that’s down to us to organise it and give all of them an opportunity.”