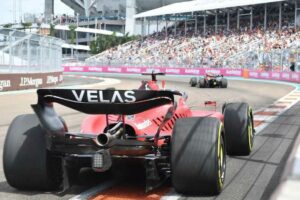 Having been outstripped by Red Bull for straight-line speed in Miami, Ferrari are planning their first significant upgrades of the season for Barcelona.

Although they still lead both the Drivers’ and Constructors’ standings, Ferrari are now trailing 3-2 to Red Bull in race wins – specifically Charles Leclerc to Max Verstappen, who has taken the last two victories.

The current trend suggests Red Bull could soon take control of both championships, but the Italian giants are hoping to stave off that prospect with some improvements to the F1-75 for the Spanish Grand Prix.

Red Bull have already introduced upgrades and also shed some weight from the RB18 for the Emilia Romagna Grand Prix, the first of those back-to-back triumphs for Verstappen – so now it is Ferrari’s turn to strike back in that area.

The Race are reporting the Scuderia intend to have a new floor on their cars at the Circuit de Catalunya which they hope will alleviate the ‘porpoising’ they have been prone to.

We’re home and ready to get straight back to work 👊#essereFerrari 🔴 pic.twitter.com/vezp1zSC3Y

Team principal Mattia Binotto is quoted as saying: “In the next races it will be at least our turn to try to develop as much as we can the car by introducing upgrades.

“I think it’s not a surprise that we may have a package in Barcelona which will be important for us.

“As usual, I hope the package we are introducing is working as expected in order to try to catch up the current gap we’ve got compared to Red Bull.”

Binotto believes Red Bull, following the upgrades they rolled out for Imola, have “got a couple of tenths per lap faster to us”.

However, it is in race pace, especially evident in straight-line speed, where Red Bull are particularly excelling after Ferrari achieved a front-row lockout in Miami – although Verstappen was playing catch-up after missing the vast majority of Friday practice due to car gremlins and also made a mistake on his final qualifying run to start the race third.

Binotto added about the Miami Grand Prix: “Red Bull were very good on the medium tyres to be as fast as us in the very slow speed corners.

“It’s something we need to assess and understand. And, in fact, I believe it’s that they have got upgrades in the last races that have made their car simply faster.”

Leclerc has a 19-point lead over title-holder Verstappen in the Drivers’ championship, while Carlos Sainz will be hoping his home race in Barcelona may finally yield his first F1 victory at the 146th attempt having returned to the podium in Miami after two early exits.