Home » Racing » Ferrari change Charles Leclerc's PU, but to an old one

Ferrari change Charles Leclerc's PU, but to an old one 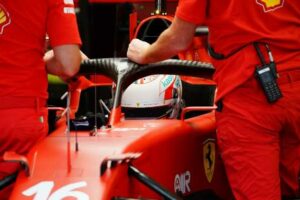 Charles Leclerc reportedly has a new old engine in his Ferrari following his engine braking troubles in qualifying at Monza.

Leclerc only just managed to make it into Q3 for Ferrari’s home race, the Italian Grand Prix, as the drivers struggled with an issue with his Ferrari power unit.

He asked Ferrari “is everything fine with the car, with engine braking especially?” and was told to box, it wasn’t fine.

However, overnight the Scuderia made the call to change the Monégasque driver’s power unit ahead of Saturday’s running.

The team, though, did not put in a new engine, they put in an old one to avoid an engine penalty.

And given that Leclerc’s second power unit was destroyed at the Hungarian Grand Prix when he was hit by Lance Stroll, that means the team has had to revert to his first engine of the season.

Leclerc may not have a grid penalty, but given that it is his older power unit he is expected to be down on power.

Tough day with the issue in qualifying so overall P8 isn't too bad. We'll get it fixed and try to gain some positions tomorrow. pic.twitter.com/lJklgAzae4

F1 TV are offering PlanetF1 readers 10% off both monthly and annual subscriptions! ! In order to claim this fantastic discount, click the following link and use the promo code PLANETF10 at checkout!*

*The offer ends at midnight on September 12 and excludes Netherlands

Speaking to the media after Friday evening’s qualifying, the 2019 Italian Grand Prix winner would not go into details about his engine issue.

“It was not nice,” he said. “I won’t go into the details about what I felt but there were some problems.”

Ferrari racing director Laurent Mekies said after qualifying that it had been made “even more intense for us because of a problem with the electronic management of the engine braking on Charles’s car right from his very first run in Q1.

“We tried to find the cause and gradually the situation improved, but Charles definitely didn’t have an easy time of managing the afternoon.”