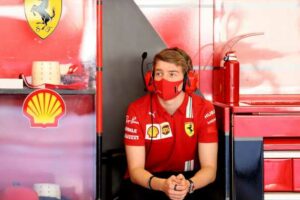 With just 20 seats in Formula 1, Mattia Binotto says it is “shame” that there are so few opportunities for the Scuderia’s junior drivers.

While Schumacher was placed at Haas for 2021, Ilott spent the bulk of this year on motor racing’s sidelines as a Ferrari test driver and Alfa Romeo’s reserve. The 22-year-old eventually headed to America to compete in two rounds of the IndyCar series.

This year it is Robert Shwartzman who is looking for a way into Formula 1 for the 2022 season, but all avenues are closed to the Russian driver.

Ferrari have already confirmed their full line up in Charles Leclerc and Carlos Sainz while Mick Schumacher is expected to remain at Haas.

Ferrari’s other options for its juniors, Alfa Romeo, is no more with the Ferrari-powered team adamant their 2022 line up will be their own choice, potentially to the detriment of Antonio Giovinazzi, who joined the team in 2019 when Ferrari still had a say in Alfa’s drivers.

Shwartzman, third in the Formula 2 championship, will either have to spend a third season in the feeder series or follow Ilott in looking elsewhere.

Binotto admits it is a “shame” that F1, with just 20 cars on the grid, as so few seats open for juniors.

“Certainly it’s a shame that obviously there are very little opportunities for seats in F1,” the Ferrari team boss told Autosport when asked about Ferrari’s junior drivers.

“And there are not many alternatives. I think a driver is really very strong, he is always finding somehow maybe an opportunity, but it’s something on which we need to help, the introduction of rookies in F1.

“Certainly as Ferrari we are trying to promote the young drivers, we’ve got our own Ferrari Driver Academy, we are giving them as much opportunity as they can have to drive an F1 car.

“So it’s somehow important as well to try to create opportunities in F1. That’s why the discussion with F1 and the FIA is important.

“Between teams, F1, FIA, we’re always discussing how we may help them through extra sessions, extra testing, participating to some race weekends.

“It’s certainly an important discussions that we need to have. And to conclude, because we certainly need to promote the young drivers in our cars.”

Asked specifically about 22–year-old’s Shwartzman’s options for 2022, Binotto replied: “I think first we need to conclude the championship, and stay focused on it. It has not been not an easy season for him so far.

“But he’s very focused, trying to finish well, so we will not distract him on the performance, and keep him focused, and we will encourage him to try to do as good as he can from now to the end of the season.”