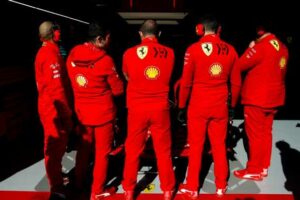 Ferrari’s 2022 challenger has passed its crash tests, clearing it for use in the 2022 season, according to a report.

The 2022 season is set to be a huge opportunity for several teams to either cement their place at the top end of the Formula 1 hierarchy, or work their way through the pack under the heavily revised regulations.

Ferrari hope that this will be their ticket back into the conversation for wins and titles in Formula 1, so while 2021 was an important season for the team as they claimed P3 in the Constructors’ Championship, their main focus was nailing 2022.

Of course, the first major hurdle to pass is homologation of the chassis, and as reported by the Italian arm of Motorsport.com, this goal has now been achieved.

“Ferrari has homologated the chassis of the red 2022 [car],” they stated.

“The Prancing Horse single-seater has also brilliantly passed the frontal crash test, which means that the FIA’s technical commissioners have given the go-ahead for it to take to the track in the winter tests to be held in Barcelona from 23 to 25 February.

“As always, Ferrari carried out the dynamic test at the Bollate CSI Centre, which is recognised by the International Federation.”

The report adds that Ferrari had carried out a crash test in late 2019 to gain an understanding of the development restraints under the new regulations, which utimately were pushed back a year to 2022 due to the financial impacts of the global pandemic.

And between the tests, Ferrari’s 2022 car receieved a sizeable makeover.

“The data collected was very useful in setting the design constraints for the 2022 car, which in the meantime has been extensively revised, including the front end, by the staff led by Enrico Cardile [Ferrari aero chief] and aerodynamicist David Sanchez,” the report states.

Speaking about Ferrari’s expectations heading into the 2022 season, team principal Mattia Binotto said: “Obviously, if Mercedes and Red Bull have been able to develop the cars we have seen over the last few years, it means that they have tools, methodologies, calculations, simulations and other certainties that they have refined over time.

“So I think it’s presumptuous to say today that we’ll beat Mercedes and Red Bull, because I think the right approach is to set ourselves the goal of wanting to win.

“How many races do we want to win? As many as possible, when I say that as Ferrari we must always aim for the best, it’s true, we don’t want to start a season underwhelmed on the expectations front. What we will say internally is that we want to win as many races as possible.”

Mercedes were the first team to fire up their 2022 car, releasing a video of their W13 roaring into life on December 23.