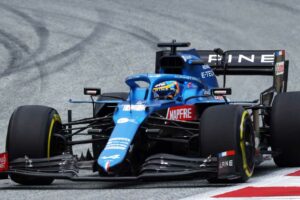 The sport has yet to see it’s first sprint qualifying, and yet already two-time Formula 1 champion Fernando Alonso thinks F1 will introduce modify new sprint qualifying format after it debuts next weekend at Silverstone.

Meanwhile, seven-time world champion Lewis Hamilton predicts the short 17-lap race to determine the starting grid for the British Grand Prix grid on July 18 will be little more than a parade. Starting order for the qualifying race will be set by special Friday qualifying.

“I always like to try new things and it is a format that can bring surprises,” Alonso said. “I’m sure there will be tweaks for the other two events, because even Formula 1 is saying this is a test.

“We will have Q1, Q2 and Q3 on Friday and it will be very difficult to change the order of qualifying after that. The fastest will start first on Saturday, it will be more or less like that in the race and then you get to Sunday like that as well. So let’s see how it goes at Silverstone, but I don’t think we will see much that is new. The fastest cars will be ahead.”

As for his own 2021 season, Alonso says he is enjoying his return to Formula 1, especially since he got a new power steering system up and running recently.

“Renault had evolved towards a different power steering and front suspension setup which gave a feeling in my hands that I’m not used to. For Ricciardo, I think he is going through the opposite,” Alonso added, referring to his predecessor who is struggling since moving to McLaren.

The recent changes to his Alpine car have coincided with a slump for Alonso’s teammate Esteban Ocon, who earlier in 2021 was setting the pace.

“At first I could not reach him. I did not feel comfortable and that slowed me down a bit,” said Alonso. “I don’t know if the changes we made to the car coincided with this bad moment for Ocon or if it’s just the natural progression.”