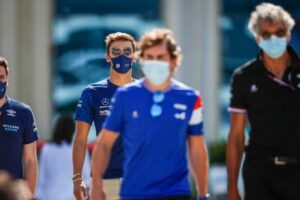 Fernando Alonso was sad to see that it was George Russell who he was passing for P10 at the Austrian Grand Prix.

Alonso and Russell also went to battle last weekend at the Red Bull Ring, but the circumstances were different with Russell doing the attacking on that occasion as he challenged Alonso for P7.

Sadly, though, Russell was forced into retirement through an engine issue, costing him a golden opportunity at a first point with Williams.

For much of the Austrian Grand Prix, it appeared that Russell was going to finally end that unwanted streak…until Alonso came up behind him on fresher tyres.

And so there was little the Briton could do as Alonso made the move into Turn 4, sending Russell out of the points.

Alonso has never been shy to make his admiration for Russell public, seeing him as a future star of Formula 1, and so he was hoping that it would not have been Russell who he had to take P10 from, but that is just the nature of Formula 1.

“I think we have to be happy with a point,” Alonso told reporters after the race.

“Obviously it’s too little reward for the job and the performance of the car, but it’s what we could achieve today starting that far back.

“I felt a little bit sad for George because he drove an amazing weekend, and when I saw P10 was him, I was hoping anyone apart from him…but that’s the sport.

“But I had much better tyres, much better traction out of [Turn 3] and I could make the move three laps from the end.

“So he will have more opportunities hopefully for podiums and wins in the future.”

Q3 ✅
A great overtake on Stroll ✅
A huge battle with Alonso ✅

We've got plenty of positives to take from the #AustrianGP and we'll keep building from here 👍 pic.twitter.com/rO4vNL8Xu3

Alonso looked a clear Q3 candidate in qualifying before a block from Sebastian Vettel triggered his Q2 elimination, but Alonso proved that the pace was still there in his Alpine by making his way back into the points in Austria.

But with the midfield order regularly shifting, Alonso is not quite sure where the A521 stands in the approach to the British Grand Prix at Silverstone, where we will see the debut of sprint qualifying.

“I don’t know, it is quite up and down for everybody in the midfield,” he said when asked where Alpine stand in the pecking order heading into Silverstone.

“Silverstone is going to be a good test because it is a very different circuit, a lot of high-speed corners and the sprint race on Saturday, so I think we have to be very flexible with our targets at Silverstone and see how it goes.”