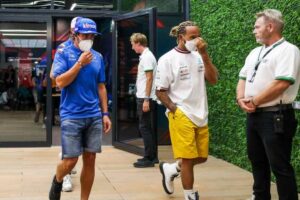 Ex-F1 racer Heikki Kovalainen feels Fernando Alonso’s career has suffered ever since his time at McLaren with Lewis Hamilton.

Hamilton and Alonso were team-mates at McLaren in 2007, Hamilton’s rookie season in Formula 1, but it proved to be the only season of this partnership.

After a rocky season for the team, involving multiple flashpoints between Alonso and Hamilton who finished level on 109 points, Alonso’s contract was cancelled by mutual consent, at which point he returned to Renault.

In the years which followed, Alonso’s choice of team when moving has at times been questioned, most notably when he left Ferrari to return to McLaren in 2015, with a poor three-season stint following as the Honda power unit failed to impress.

And Kovalainen wonders if such wrong decisions can all be traced back to that season with Hamilton and the shock factor of the pace which the rookie showed.

“Since [Alonso’s] championship years with Renault he’s always made the wrong move and just sometimes I wonder if the trigger was the surprise of Hamilton’s speed,” Kovalainen told talkSPORT.

“If that is the core issue, then the falling out with [McLaren boss] Ron Dennis and with the team followed and there wasn’t any other place to go, Renault was kind of on a downward slope, he was just playing catch up after that and that never really recovered.”

Heikki Kovalainen and Lewis Hamilton side by side in the MP4/23 during a wet 2008 #BritishGP 🇬🇧, Silverstone. #McLaren #F1 pic.twitter.com/FbC8yS4DZV

Kovalainen himself knows what it is like to be Hamilton’s team-mate having also partnered him at McLaren in 2008 and 2009, which proved to be his final opportunity in a competitive car.

So, from experience, the Finn knows just how hard it is to contend with a driver of Hamilton’s ability.

“Occasionally I could match him but over the full season I had to stretch every session to match him.

“You can only do so much stretching and then you run out of energy and that was the case with me, I didn’t have enough margin in my capacity to do the times and the races that he did, so it was not easy.

“His level of performance is so high that even for super talents like Max [Verstappen] it requires a lot of effort, a lot of focus, a lot of energy, so it’s not going to be easy, not everyone can handle that, it’s as simple as that.”

One driver who did manage to ‘handle that’ was Nico Rosberg, who back in 2016 as Hamilton’s team-mate, beat him to the Drivers’ Championship.

But, the strain of that achievement led to Rosberg retiring from Formula 1 just days after.

“I think Rosberg had to use all the tools from his toolbox to be able to beat Lewis and that nearly killed him,” said Kovalainen.

“He said it himself, he couldn’t have done another season like that or he’d be dead.”