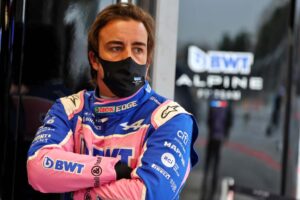 Fernando Alonso is looking to help the future generation of motorsport talent, having co-founded a new management agency – A14 Management.

Alonso has already put his name to the Fernando Alonso Karting School in his native Asturias in Spain, having designed a programme that looks to set children on the path towards a successful junior career in motorsport.

He has now taken that one step further by taking further-developed junior talent under his wing, having co-founded the agency alongside his own manager, Alberto Albilares, and Albert Resclosa Coll, with whom the Spaniard worked during his own karting days in the 1990s.

Today a different way to manage drivers is born.
Make your dreams come true.
A14Management intention is selecting a small group of drivers, instilling them with indispensable values to achieve their goals, with the support of the best team and extensive experience in motorsport. pic.twitter.com/O4tnZ9x82m

The A14 Management website says the company was “born with the intention of selecting a small group of drivers from the world of Karting, the cradle of this sport, and ingraining them with the indispensable values needed in order to achieve their goals such as; physical training, advice on decision making and economy management among others with the purpose of maximising the potential of each athlete.

“Most importantly, we’ve learned this from our own experience.”

Two drivers have been signed to A14 already, with French-Swiss Formula 2 racer Clement Novalak coming in as he had already been under the management of Coll, and 15-year-old Bulgarian Nikola Tsolov, who will compete in Spanish Formula 4 this year.

In Novalak, they will look after a driver who will look to make the next step after finishing third in FIA Formula 3 last season, having won the prestigious British Formula 3 title back in 2019, and he now makes the full-time transition to Formula 2 for this year, driving for MP Motorsport.

This move appears to signal another step towards life when Alonso eventually retires from driving, as he looks to help where he can for the drivers of the future as they find their way in motorsport.

In the here and now however, Alonso has been gearing up for the new season to start after completing three days of running with Alpine in Barcelona, but he admitted his belief that Ferrari will go into the season with the strongest car.

Alonso will begin his 20th season as a Formula 1 driver when the lights go out in Bahrain on Sunday 20 March.