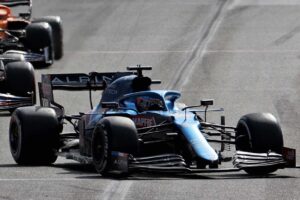 Fernando Alonso says he was pleased with his performance in Baku, but Alpine’s creative strategy choices are down to a lack of race pace.

The Spaniard managed to make his way up from P10 to P6 in the two-lap dash to the line after a crazy race in Azerbaijan, where Max Verstappen crashed out from the lead due to a tyre failure, bringing out the red flag.

This left two laps for drivers to race to the finish on fresh tyres and low fuel, which Alonso felt was a “fun” way to finish the race in Baku.

Alonso qualified P8 in his first Q3 appearance in Baku and, while Alpine’s pace in the race appeared to be lacking, he was able to extract a strong result after team-mate Esteban Ocon retired early on.

“Yeah, definitely,” Alonso said when Sky Sports asked if he would have taken a P6 finish before the race. “Especially because two laps from the end I was tenth, it was a very productive last two laps.

“It was fun with the two-lap race at the end and a lot of opportunities, very aggressive [from] everybody and we tried to recover places.

“We did manage to take some good points so I’m happy for the team, and the weekend was quite solid for us.

“I think tenth was too little reward after a good weekend, so I’m happy with sixth.”

It feels like it went a bit under the radar that this man snuck his way up to P6 from P10 in the two laps after the restart. Nice work, Fernando 😉 #AzerbaijanGP 🇦🇿 #F1 pic.twitter.com/o0Ab8LwAWo

Double World Champion Alonso has not been afraid to take a different approach to his fellow drivers when it comes to strategy, due in part because he believes his Alpine car is still lacking race pace – which limits their options under normal circumstances.

He has previously taken an extra pit stop, or stopped early, in Bahrain and Monaco in particular as he looked to make his way up the field in earlier rounds, but these moves had not paid off for him previously.

The 39-year-old believes his team were still without a bit of speed in the race, with the team’s creativity on strategy calls born of an overall speed deficit.

“We lack a little bit of pace, we try to be creative with the strategy, undercutting and then taking the opportunity on the first Safety Car,” he elaborated.

“We miss three or four tenths on pace and that was a killer for any strategy. We need to review that, we need to make some improvements for the next one but I’m happy with today.

“Let’s think for the following race next week.”