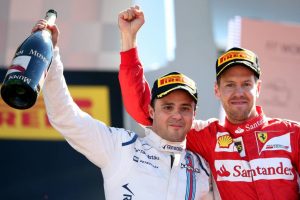 Felipe Massa has backed Ferrari’s decision to dispense with Sebastian Vettel’s services at the end of this season and bring in Carlos Sainz.

Well before the 2020 F1 action had got under way, Ferrari announced they would not be renewing Vettel’s contract for next year and that he would be replaced in the team by Sainz, partnering Charles Leclerc.

Vettel has since signed for Racing Point, who will be rebranded in 2021 as Aston Martin, and the last of his six campaigns with the Scuderia is not proving to be a happy one for either party.

With the Italian giants having plummeted from being World Championship hopefuls to a midfield team, even struggling in amongst the backmarkers of late, the German driver sits only 13th in the drivers’ standings with 17 points after nine races.

Massa, who spent eight years with Ferrari and won 11 races for them, also getting to within a whisker of capturing the title in 2008, believes it was the right call by his former employers to phase out Vettel.

“To see such an important team suffering in this way is very sad,” the 39-year-old Brazilian, who has competed in Formula E for the last two years, told Globo Esporte. “Nobody wants to see Ferrari having these problems.

“Vettel’s time has passed, so much so that his results this year show that Ferrari may have taken the right option not to renew his contract.

“Carlos Sainz is a good driver, young and has a lot to grow as well. Of course, they need to have a competitive car before anything, but I hope for the sake of him and Ferrari.

“It is an exceptional team, I have a great affection, and without a doubt different from the others, as if it were a religion.”

Massa, who has recently returned to his native Brazil to compete in the Porsche Endurance Cup, also paid tribute to Lewis Hamilton as the World Champion closes in on equalling Michael Schumacher’s record of seven drivers’ titles.

“This is another year in which Hamilton has dominated, playing with the other drivers and doing an exceptional job,” said Massa, who also competed for Sauber and Williams in F1. “He deserves it for the pilot he is.

“But we have had nice races like Monza and Mugello too, different things like Pierre Gasly’s victory. I think everyone was rooting for him.”