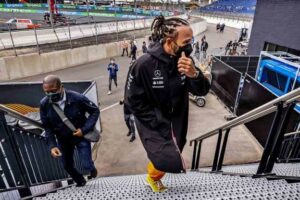 A Lewis Hamilton fan has organised for a plane to fly over Zandvoort on Friday, showing a “cheeky” message in support of the World Champion.

The Mercedes driver is expected to be met with a heavily partisan reception at title rival Max Verstappen’s home race, but a fan named Neil Steele has chartered a plane which could rile the home crowd.

The message quotes Verstappen and his engineer’s catchphrase when the Dutchman takes pole positions and victories, so the banner in favour of Hamilton will read: “7 X WDC [World Drivers’ Champion]. Simply lovely #TeamLH.”

This show of solidarity didn’t come cheaply for Steele, however. He revealed he had to pay £1600 for the flyover to be organised in support of the reigning World Champion.

“It’s a cheeky opportunity to show Lewis some extra support as he steps into the lion’s den here in Max’s back yard.” Steele told The Sun.

“I hope, a small way to get one up on the 70,000 Dutch fans that will surround and outnumber us few Lewis and Mercedes fans here at the track this weekend.

Hamilton was roundly booed at the Hungarian Grand Prix prior to the summer break, in front of a crowd filled with a sea of orange in favour of Verstappen.

The Red Bull driver doesn’t feel it’s his place to be able to stop the jeering aimed at the Mercedes man, citing biased support as football matches as a comparison.

Zandvoort circuit director Jan Lammers is keen for this not to happen, urging people to “respect” the drivers on the grid – particularly the home favourite’s direct rival.

“Show your decency when a seven-time World Champion comes here. We should be proud of that,” said Lammers.

“It is downright antisocial and unwise to yell ‘boo’. Respect is something you have to show if you want to get it for yourself.

“As motorsport enthusiasts, we have to show that we handle this situation in a better way. Make sure that other people don’t have to be ashamed.”

Around 70,000 spectators are expected at Zandvoort every day across the weekend, and the grandstands were almost packed to capacity to welcome Verstappen at his home race.