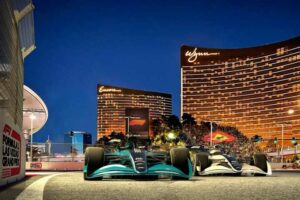 2023 will see three US GPs, including Vegas – let's hope it's better than last time…

A Las Vegas Grand Prixwill be on the Formula 1 calendar next year, the first time Vegas has hosted a race since 1982. It means that potentially four races could be held in North America, with Montreal, Miami and Texas already in the race schedule for 2022. One of Liberty Media’s primary aims in its management of F1 was to expand the appeal of the sport in the USA, to show those viewers that open-wheel cars could do more than circles. Seems like the plan is working…

The new track will be 3.8 miles long, taking in the Las Vegas Strip, the Bellagio fountains, the Paris Casino’s Eiffel tower and Caesar’s Palace. “The incredible neon lights of Las Vegas will be the backdrop for Formula 1’s third race in the US and highlights the enthusiasm and excitement in the US for Formula 1 as the sport continues to grow its global fan base”, it says in the press release. Drive to Survive will have also played a key part, surely.

The race itself will take place on a Saturday night in November 2023 (exact date still TBC), and run for 50 laps. The new circuit boasts 14 corners, three straights, and a predicted top speed in excess of 212mph. F1’s President and CEO Stefano Domenicali said: “There is no better place for Formula 1 to race than in the global entertainment capital of the world and we cannot wait to be here next year. I want to thank everyone who helped deliver this event, especially Governor Sisolak, the Clark County Commission, Steve Hill at the LVCVA, and our local partners.”

So far, so good, then, although it does mean another street circuit for these huge new F1 cars to race on. Still, can’t be as bad as the last time GP cars raced in Vegas, as shown in this video https://youtu.be/fqfWuqZitms. Held in what was basically a Caesar’s Palace car park, it was not exactly an evocative circuit, flat and dull with concrete barriers everywhere. It wasn’t popular, lasting just two seasons in the early 1980s. That said, as the last race of the ’81 season, it doesn’t want for drama, and Murray Walker’s commentary is, as always, the perfect accompaniment. If Las Vegas 2023 can provide similar levels of excitement with a more inspiring backdrop, hopefully it’ll remain a fixture for a bit longer…