F1 Pitstops Will Get Slower Thanks to New FIA Directive 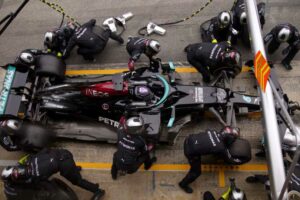 In Formula 1, a race is often won or lost in the pits. A botched stop can waste precious seconds that are difficult to gain back on the track, and even a few tenths could be the difference between maintaining track position or coming out behind a bitter rival. It’s therefore unsurprising that teams will do whatever they can to gain an advantage in this area. However, RaceFans reports that teams may have to cool it just a little, with the FIA introducing new directives that are expected to slow pitstops down in coming races.

The new technical directive, TD22A, will come into force from the Hungarian Grand Prix onwards, which is scheduled for August 1. The aim of the new regulations is to help clamp down on unsafe releases where cars leave the pitbox too soon or without their wheels properly attached. This hasn’t happened yet in 2021, but similar incidents have led to serious injuries in the past. TD22A refers to Article 12.8.4 of the Formula 1 Technical Regulations,  which states “Devices which are used to fit or remove wheel fasteners may only be powered by compressed air or nitrogen. Any sensor systems may only act passively.” The new directive is likely in response to suspicions that some teams may be automating parts of the pit stop procedure through the use of special equipment. It also aims to stop crew members anticipating the completion of tasks before they’re actually finished. To combat this, the directive has included provision for human reaction times in the pitstop process.

Per the directive, mechanics must not respond quicker than 0.15 seconds to the completion of a task during the pitstop. For example, if a wheel nut is tightened, and a mechanic presses a button to carry out a further action within 0.15 seconds of this event, the pitstop system must register that input as invalid as it happened too quickly for it to be a legitimate human response to the event occurring. This would indicate either illegal automation rather than a human response, or that the mechanic anticipated the event rather then waiting for it to be properly completed. The button must thus be pressed again to complete the action. The directive also states that there must be a 0.2 second gap between the final all-clear signal being given to the mechanic in charge of releasing the vehicle, and the driver being given the signal to exit the pitbox.

The news comes just a week after outlets like PlanetF1 reported Mercedes were making complaints about Red Bull’s pit equipment, in the face of the team’s devastatingly fast pit stops this season. Red Bull have executed the top six fastest stops this year, with the shortest being 1.93 seconds for Max Verstappen’s stop at the Bahrain Grand Prix. The team also hold the all-time pit stop record, which stands at just 1.82 seconds for Verstappen’s stop at the 2019 Brazilian Grand Prix.

It’s estimated that the new regulations will slow pitstops by around 0.2-0.3 seconds, a significant amount when it comes to holding track position against a rival chasing down the main straight. It bears noting that the new directive adds yet another thing for stewards to investigate and measure, while doing little for the viewing audience at home. The FIA must be lauded for taking safety seriously, of course. It’s just a shame that it’s been done in a way that could potentially lead to more frustrating penalties for teams and drivers—certainly the last thing modern F1 needs. Maybe just bring back the lollipop guy? Seeing them running around was always cute as heck.