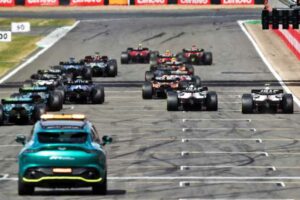 A meeting of the F1 Commission has resulted in a decision being made regarding calls for the budget cap to be increased in light of inflation.

With Formula 1’s financial regulations decreasing the 2022 budget cap to $140 million dollars, restricting the team’s car and performance spend to that figure, calls have been prevalent since the start of the 2022 season to increase that figure.

This is due to an unprecedented level of global inflation, exacerbated by Russia beginning military action in Ukraine. This had had a knock-on effect on logistics and freight costs, as well as spiralling energy costs – resulting in the teams having to cut spending elsewhere.

Red Bull team boss Christian Horner warned that some teams may end up having to miss races towards the end of the season in order to keep within the budget cap, as talks began in earnest to evaluate whether the cap is to be increased.

The F1 Commission, including all the teams and the FIA, met in Austria to discuss the matter, as well as some other issues, with a decision now reached.

According to the FIA, the governing body shared the opinion the teams could be at risk of non-compliance with the Financial Regulations as a result of inflation and, following consultation with the Financial Advisory Committee, a proposal has reached the required majority – supported by the FIA, F1 and nine of the 10 teams. It’s not evident which team voted against.

The proposal acknowledged the unexpected inflation, and will see a permitted increase to the budget cap of 3.1%, and will allow for compounding of this rate as from 2023. For 2022, this translates to $4.3 million extra.

“The regulations say that, if the inflation is above 3%, then we will adjust accordingly,” Mercedes‘ team boss Toto Wolff told Sky F1 on Friday.

“We had a time lag, so it’s bit complicated to explain, but we got 3% on top, which should cover a little bit of the inflation, but not the freight and energy costs.”

Other issues up for discussion

With F1 evaluating ways to improve the weekend schedule to reduce the workload on operational staff, more areas have been earmarked for improvement. The FIA have highlighted one weak area being in relation to parc ferme timings after qualifying.

Following the FIA introducing a technical directive set to figure out ways to govern the issue of porpoising on the F1 cars, which wasn’t given a solid date of enforcement beginning due to the governing body using the last two Grand Prix weekends to gather data, the directive will now come into effect from the Belgian Grand Prix.

Several proposed actions to address porpoising in the 2023 Technical Regulations have also been discussed, with clearer directions being brought to the Technical Advisory Committee.