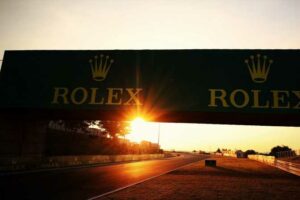 Ferrari completed a clean sweep of Friday practice, Charles Leclerc topping FP2 as he took over from team-mate Carlos Sainz.

It was not quite a Ferrari one-two though, with McLaren’s Lando Norris setting a very handy 1:18.662 to split the red cars, FP1’s pacesetter Sainz forced to settle for P3 as Friday’s running reached its conclusion.

Max Verstappen managed only P4 in the Red Bull, but within three-tenths of the ultimate pace, he remains very much a threat as the drivers head into Saturday, which is expected to feature plenty of wet-weather action.

Having topped the opening practice session of the race weekend, Ferrari were once more setting the early pace in FP2, this time Leclerc on top ahead of Sainz as the session ticked past its first quarter.

Alex Albon then got himself in a spin, losing the rear of the Williams FW44 on the entry into Turn 1. He got going again, though that set of soft tyres, and the flying lap of Mercedes’ George Russell, were both very much ruined by that incident.

As drivers switched to the soft rubber for their qualifying runs, Lando Norris shot up to P1 on 1:18.662, Leclerc bettering that by a couple of tenths, proving the strength of that effort by Norris in the McLaren.

There was a gearbox scare for Leclerc in the latter stages of the session, but fortunately that did not materialise into a problem, although he did drive into the jack on his first attempt to exit the garage.

No harm done though as Leclerc completed his race simulation and topped FP2.

You can read our full FP2 session report here.